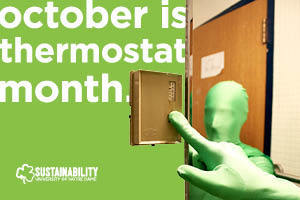 The weather is starting to cool off, and thermostats are therefore a fitting theme for the second month of the Dorm Energy Championship. Sustainability Commissioners in residence halls across campus will be conducting thermostat audits, asking residents if they have malfunctioning thermostats, windows that don’t latch, or other problems that reduce heating efficiency.

“Many students think that the thermostats in their dorm room aren’t supposed to work, but that’s not true,” said Sean Gervais ’15. “Thermostats can get broken or lose their calibration due to age or because the former residents were hard on them. The only way to get them fixed is if people report the problems they encounter.”

September’s theme was lighting, and the residence halls saved a total of 5,300 kilowatt hours during the month, equivalent to over 7,000 pounds of carbon dioxide emissions. Halls added excitement to the first month’s competition by earning green points that they could give to the dorms of their choice to bring them down in the rankings. Several halls earned green points by putting on sustainability-themed events, including a glow-in-the-dark volleyball competition and a movie watch. Other halls earned green points by getting out volunteers for Game Day Recycling.

The Sustainability Commissioners had the opportunity to allocate their halls’ September green points at the commissioner meeting last Friday. Some points were allocated to dorms that were ranked high in the first month, but more were allocated based on long-standing dorm rivalries. There will undoubtedly be plenty of opportunities for revenge in the next seven months of the competition.