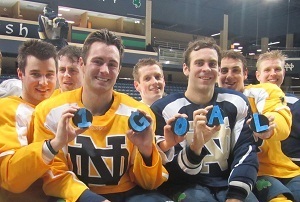 Hockey fans can be maniacal about their teams, but during the February 24th Notre Dame vs. Michigan State hockey game, fans had another reason to be wild. GreeND, the Office of Sustainability and Athletics joined forces to make this hockey game a RecycleMania Gameday Recycling event.

The hockey Gameday Recycling initiative was to promote ND’s participation in RecycleMania, a nation-wide collegiate recycling competition, and to encourage recycling across campus. The competition runs from February 5th through March 31st and 594 colleges and universities compete for the highest recycling rate.

To get the word out about the competition and the event, ND leveraged a grant they received of $300 from RecycleMania. Students walking into the arena were greeted with blue candy and cupcakes (blue is the iconic color of recycling,) and were reminded to recycle both during and after the game. Meanwhile, a team of 30 student volunteers— adorned in dozens of blue spirit beads—stood at each “recycling” and “landfill” receptacle in the arena, bestowing blue spirit beads on all fans that recycled. Their mission was to educate the crowd about RecycleMania and encourage fans to help Notre Dame increase its per capita recycling rate — and improve its ranking in the competition. 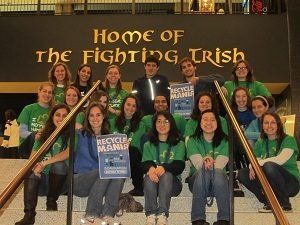 Students and fans alike were excited to hear student volunteers’ message about RecycleMania and receive blue spirit beads for doing something good. Everyone was pleased to discover that Notre Dame was ranked 77th of 594 universities in the competition with a per capita recycling rate of 33.33%, but fans were eager to do better.

It is too soon to tell what impact the RecycleMania hockey game day recycling event had, but GreeND and the Office of Sustainability hope students continue to respond to the recycling campaign. Notre Dame’s 2-0 win against Michigan State may have marked the end of the hockey game, but the RecycleMania competition continues through March 31st. Remember— recycle to win!