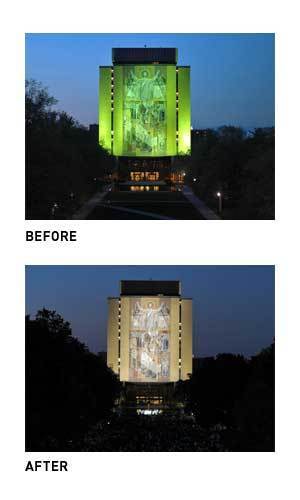 Touchdown Jesus’ halo shines a bit brighter these days. Last May, new LED lights were installed to illuminate the Word of Life mural on the south side of the Hesburgh Library. The lights replaced the old mercury vapor fixtures that previously illuminated the 134-foot tall mural.

The high-efficiency LEDs are expected to save approximately 57,000 kilowatt hours of electricity annually, reducing campus carbon emissions by nearly 80,000 lbs. per year. “The upgrade was part of the university’s goals to increase energy efficiency on campus and further the reduction of carbon emissions,” said Heather Christophersen, Notre Dame’s Director of Sustainability.

The Utilities Department worked with long-time partner Musco Lighting, Inc. to install the brighter, more efficient lights. Musco is a premier lighting supplier whose past projects have included lighting such prominent locations as the Washington Monument and the White House. On campus, their list of projects spans over twenty years and includes the JACC Arena, Notre Dame Stadium, Melissa Cook Softball, and Alumni Soccer Stadium. For this mural project, however, Musco donated the lighting system, which is valued at over $40,000. “The chance to demonstrate leading edge technology on such a visible aspect of the campus was an exciting opportunity,” said Joe Crookham, President of Musco Lighting.

The replacement has also improved the nighttime appearance of the mural two-fold. Because of the mercury contained in the old lights, the mural previously appeared to have a green tint. The LED lights make the mural brighter, and the stones of the mosaic appear more natural. Furthermore, these new lights have been engineered to only shine light to the top of the mural, therefore preventing excess sky glow and allowing for better view of the stars.

“The results are stunning," reported Paul Kempf, Director of Utilities. "The LED light source provides a truer representation of the mural and greatly reduces the energy consumption required to light this beautiful work of art.”