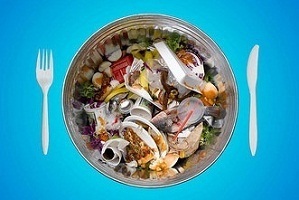 First, ND Food Services has moved to smaller trays in South Dining Hall. While there have been both positive and negative comments from the student body, the change will hopefully reduce the amount of food students are wasting, as well as the amount of water that is needed to clean the trays.

Second, Waste-Free Wednesdays is once again in full swing. During Wednesday dinners at the dining halls during November, students who clean their plates are invited to enter a raffle to win 100 Flex Points. The initiative, which was initiated through a partnership between GreeND, the Office of Sustainability, and Food Services in 2010, reduced the amount of food wasted by nearly 50% after one month.

“That’s almost half a ton of food saved every day,” said Elizabeth Davis, co-President of GreeND and a founder of Waste-Free Wednesdays. “This was a tremendous achievement, and we hope that the Waste-Free Wednesdays in November 2011 will create even more awareness around reducing food waste. We also expect to see food waste decline as the smaller trays provide some added encouragement to take a little less.”