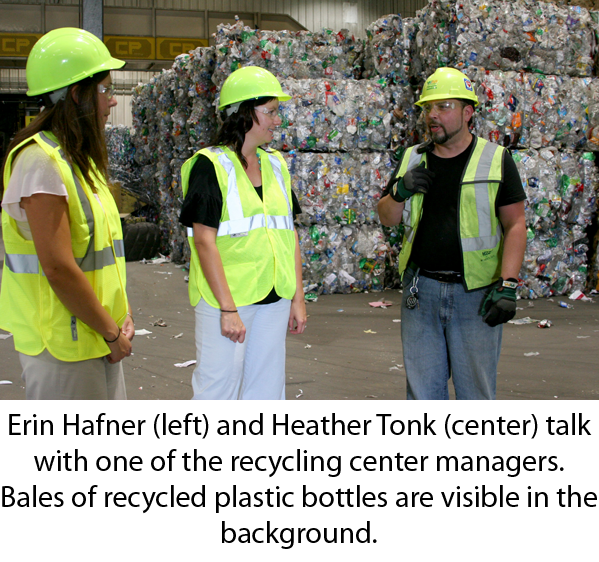 In an effort to fully understand what happens to items recycled on campus, representatives of Notre Dame’s Office of Sustainability, Food Services, and Warehouse and Delivery Services recently visited the CID Recycling & Disposal Facility, where all of our campus recycling is sent. This facility, one of the region’s largest recycling centers, is located south of Chicago in Calumet City and receives residential, commercial, and industrial waste from large parts of Chicago and northern Indiana.

“Our delegation was on a mission to obtain first-hand confirmation on many aspects of single-stream recycling that are frequently questioned,” explained Heather Tonk, Director of Sustainability. “The visit confirmed that every container we use on a daily basis should be thrown in recycling after removing excess food and liquid. Based on our observations, Styrofoam really is recyclable and you do not need to take the caps off plastic bottles.”

The group learned that the recycling center has the ability to receive a wide variety of materials, sort them efficiently, and re-sell them. “According to the plant manager, the only substances that can pose problems for loads of single-stream recyclables are foods and liquids,” said Sustainability Programs Manager Erin Hafner. “Some food residue on containers is acceptable, but large quantities of food and liquid can cause an entire load to be deemed contaminated and sent to a landfill.”

Disc screens sort materials by size by allowing larger items like cardboard to be pushed along while smaller items are permitted to fall through. A magnetic eddy-current separator is used to extract aluminum, while advanced optical sorting technology is used to separate various types of plastic. Throughout the process, workers keep an eye out for items that may have been sorted incorrectly. Each material is then sent to a baler to be compressed into large square bales weighing an average of one ton each, which are then sold to manufacturing companies.

“The efficiency of the sorting process is truly impressive,” said Julie Zorb ’11, an intern in the Office of Sustainability. “Now that we have seen the process in person, we can be better resources for members of the campus community who have questions about recycling.”