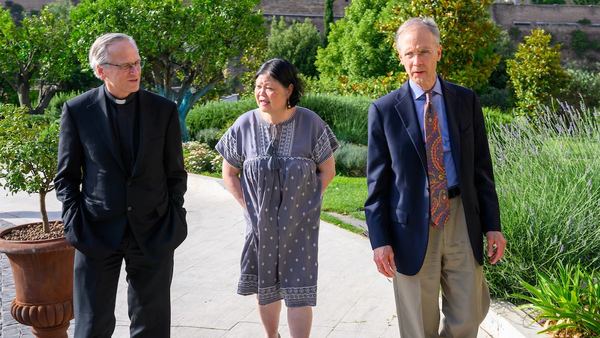 Executives from among the world’s leading energy producers and investors concluded two days of Vatican-sponsored dialogue on energy transition Friday (June 14), with — for the first time — most signing statements of support for carbon pricing and disclosures on climate change risk.

Leading the conference were His Eminence Cardinal Peter Turkson, prefect of the Vatican’s Dicastery for Promoting Integral Human Development, and University of Notre Dame President Rev. John I. Jenkins, C.S.C., both co-sponsors of the June 12-14 dialogue, “The Energy Transition and Care for Our Common Home.”

Pope Francis addressed the summit today, and participated in a rare Q&A with participants. His remarks were also released publicly.

“Collectively, these leaders will influence the planet’s future, perhaps more than any in the world,” said Father Jenkins. “I am deeply grateful for their commitment to the transition to a low-carbon future while providing the energy needed to support the integral human development of every member of the human family.”

Carolyn Woo, former dean of the Mendoza College of Business at Notre Dame, and Leo Burke, professor emeritus of management, spearheaded efforts on behalf of the Vatican and Notre Dame to encourage the energy industry and its investors on a path toward energy transition.

A Dialogue on Paths Forward

In a joint statement, Cardinal Turkson and Father Jenkins made the following observations:

At its foundation, human civilization and progress rely on energy, and the world’s energy mix is clearly in transition. A powerful driver of the energy transition is the undeniable reality of the climate crisis and environmental degradation, which affect the poor most. Addressing this social-ecological crisis requires radical change at all levels, both personal and collective. This transition needs the support of markets, significant adoption of renewables as a source of energy, increased efficiency in the use of existing resources, new technologies, farsighted policies, educated civil society, and new forms of global leadership and cooperation. As neither the energy transition nor climate change can be reduced to economic, technological, and regulatory issues alone, there is the need for a moral voice.

Given the Holy Father’s groundbreaking Encyclical Letter, Laudato Si’: On Care for Our Common Home, the Vatican is in a unique position to offer this moral voice.

Leaders from oil and gas companies, the global investment community, and other sectors strongly agreed on the urgent need for a systematic transition to a low-emissions economy consistent with a 2°C scenario while governed by care for people, especially the most vulnerable. The participants discussed the paths forward with a specific focus on (1) the integral role of a just transition that addresses the needs of disadvantaged populations, (2) importance of carbon pricing toward the reduction of emissions, and (3) necessity for disclosures to provide clear information on strategies and actions, governance process and performance. From these discussions, two joint statements relating to carbon pricing and proper disclosures are formulated. 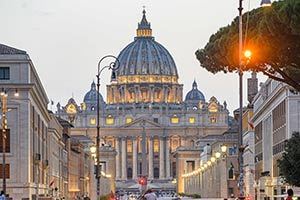 The Vatican, Rome. Photo by Matt Cashore/University of Notre Dame.

“We are immensely grateful to all participants for their generous response to its invitation to the Dialogue. At the end of the dialogue, we cannot help but be humbled by the rich engagement, sense of urgency, honest exchange, and spirit of collaboration demonstrated in this meeting. Let us move forward with resolute persistence keeping in mind the question from Laudato Si’, ‘What kind of world do we want to leave to our children and those yet unborn?’”

Implementation efforts since that time have included the introduction of five green roofs, construction of a 30,000-square-foot thermal energy production and storage facility, three operational solar arrays, and funding for several research initiatives by faculty and graduate students on sustainable energy and development. The University is on track to cease its use of coal nearly a year ahead of the initial projected date.

Founded in 1842, the University of Notre Dame is the nation’s leading Catholic research university, providing a distinctive voice in higher education that is at once rigorously intellectual, unapologetically moral in orientation and firmly embracing of a service ethos.

Rated among the top 20 of all U.S. institutions of higher learning, Notre Dame ranks second nationally in the percentage of students who study abroad and has seen research funding increase from $87 million to $141.5 million in the past decade.