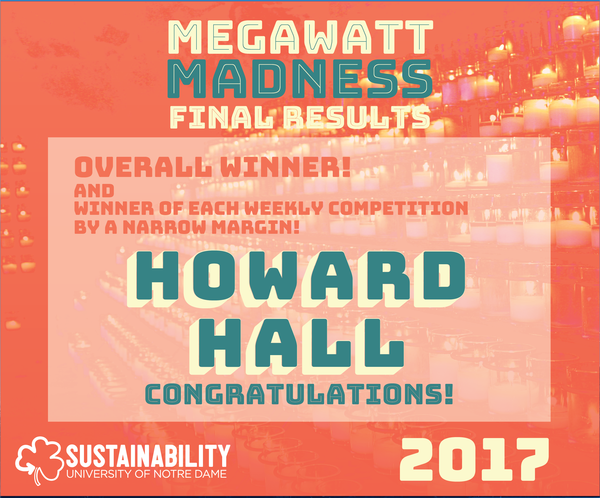 After three weeks of fierce competition, the 2017 Megawatt Madness energy competition has come to a close.  While Howard Hall did come away as the grand prize winner, each of the residence halls deserves a round of applause for their work – saving 19,182 kilowatt hours of electricity overall, or roughly four and a half tons of CO2 emissions.

To recap, the competition kicked off with a Brother/Sister dorm showdown.  Howard Hall and Morrissey Manor clinched first place with a combined 10.2% average reduction in energy use.  Carroll and Lyons put up a good fight with an 8% reduction, and Knott and Pasquerilla East trailed closely behind at 7.2%.  Full of colorful berries and addicting Rise’n Roll donuts, Howard and Morrissey headed into week two of the competition with renewed conviction.

In week two, things began to heat up with rival residence halls pitted against each other.  Howard Hall won once again, besting Badin by a 19.9% reduction in energy use.  In second place, Carroll topped Fisher with a 13% reduction.  Flaherty Hall, participating in their first ever Megawatt Madness competition, showed their strength with a 9.5% reduction over Ryan Hall.  Howard celebrated week two with another round of fresh berries and Rise’n Roll, but knew that the coming week would be the toughest yet. 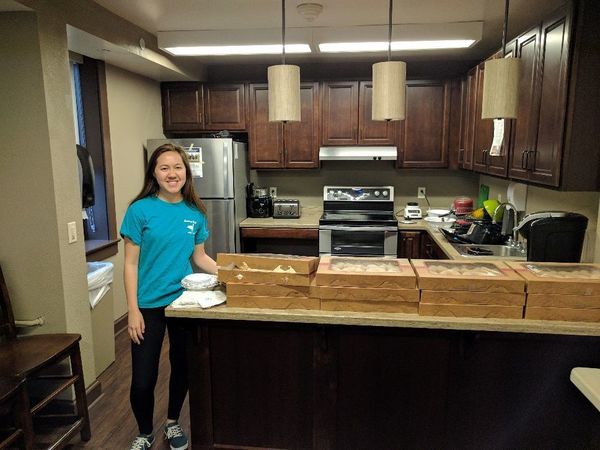 So began week three, the one week free-for-all reduction competition, and stakes were high.  After all, the winner of week three would receive a sushi rolling experience with Chef Miller at the Center for Culinary Excellence.  Over the course of the week, several residence halls vied for number one.  Carroll Hall, Howard, Knott, Breen-Phillips and Welsh Family all had their moment in the spotlight – the leaderboard was constantly changing.   In the end, Howard Hall emerged victorious over Carroll by a mere .4%.

In total, Howard Hall posted a 15.5% energy reduction over the entire three-week competition, consuming only 7,102 kWh of electricity.  O’Neill Hall, in comparison, consumed 48,090 kWh of electricity over the same period.  As a grand prize, Howard Hall will receive a coffee and conversation session with Mayor Pete Buttigieg.  Congratulations to the leaders and thank you again to all those who were involved!