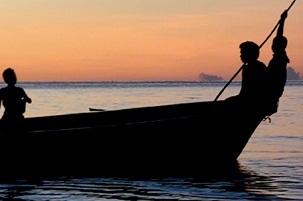 On February 2nd, Geddes Hall will host a screening of the Academy Award-nominated documentary Sun Come Up. The film follows the experiences of the Carteret Islanders, a community living on a remote island chain off Papua New Guinea that is forced to relocate due to sea level rise. They are helped by the Bishop on the mainland nearby to start new lives, but face many challenges as some of the world’s first climate refugees.

“This film truly shows the human face of climate change, and I believe it’s something everyone should see,” said Anne Whitty ’12, Co-President of GreeND. “Many people don’t realize that people are being displaced by climate change right now, and it’s amazing to get to know these people through this film.”

The 40 minute film screening will take place at 8pm in the Geddes Hall Auditorium, followed by discussion and refreshments in the Geddes Hall Coffeehouse. The program is co-sponsored by the Office of Sustainability, Center for Social Concerns, and GreeND.