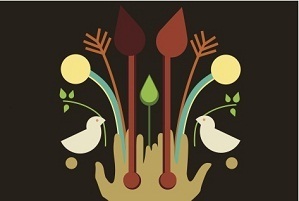 Mass will be celebrated by Fr. Bill Lies at the Basilica of the Sacred Heart at 5:15pm. At 8pm, Dan DiLeo of the Catholic Coalition on Climate Change will present A Catholic Approach to Climate Change in the Geddes Coffeehouse, followed by discussion and a reception. The Coalition’s St. Francis Pledge brings together families, parishes, schools and communities around the country in a commitment to reduce their carbon footprint and advocate on behalf of Creation and the poor.

Dinner at North and South Dining Halls will feature a nature-themed dessert buffet in honor of the Feast Day, and tables where students can sign pledges to better care for nature and the poor through service opportunities and simple everyday choices. The program is cosponsored by the Office of Sustainability, the Center for Social Concerns, the Department of Theology, and Campus Ministry.

This year’s Feast of St. Francis comes at a time when the sustainability movement stands at a crossroads. Following international failure to reach a climate agreement through the United Nations Conference of Parties in Copenhagen last December, and domestic failure to pass comprehensive clean energy security legislation, both the United States and the international community have been unable to adequately respond to what Pope Benedict XVI has called “matters of grave concern for the entire human family.”

In response, Notre Dame has strived to call attention to the moral and spiritual dimensions of carbon pollution. The Feast of St. Francis also marks the one-year anniversary of the first national conference on sustainability and Catholic higher education, held at Notre Dame in October 2009. Entitled Renewing the Campus, the landmark conference brought together representatives from the Nobel Prize-winning Intergovernmental Panel on Climate Change and the U.S. Conference of Catholic Bishops, as well as faculty, staff, and students from over forty Catholic colleges and universities across the country.

“Fr. Hesburgh has given us a vision of Notre Dame as a university that serves as both a lighthouse and a crossroads,” said Patrick McCormick ’12, one of the organizers of Renewing the Campus and the Feast of St. Francis program. “On the Feast of St. Francis, we recall the words of a saint who told us to ‘preach the Gospel at all times, and when necessary, to use words.’ The true celebration of the legacy of St. Francis will be in the actions that we take in a world that all too often loses sight of the fact that a commitment to ecological justice is inseparable from a commitment to the dignity of the human person.”