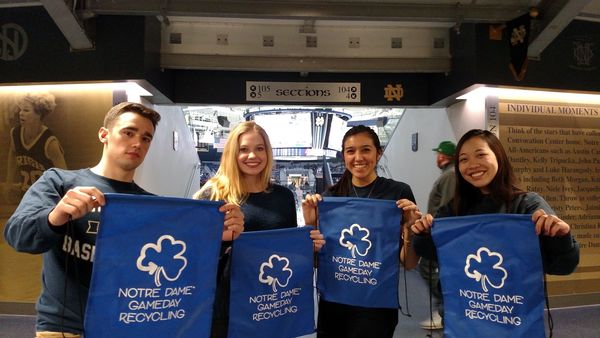 The results are in for this year’s RecycleMania competition, and Notre Dame has placed among the top 20% in the Gorilla category, which tracks bulk weight of recyclables collected during the competition.

RecycleMania, an eight-week competition from February through March, encourages colleges and universities across the country to increase their campus recycling rates by drawing on existing school rivalries. Schools report weights for trash and recycling output at the end of each week and compare with other schools. The competition began in 2001 as a challenge between rival schools Miami University and Ohio University to see who could maintain the highest recycling rate. Today the competition engages more than 600 colleges and universities.

This year, The Office of Sustainability engaged students and fans at the February 4th Men’s Basketball game against Boston College. Student volunteers were positioned around the concourse with recycling signage to help spread information about which concession stand items were recyclable. Volunteers also tweeted pictures of recycling signage with the hashtag “#IrishVisionMBB” in order to have them displayed on the Jumbotron during breaks from play.

In addition to efforts at the basketball game, recycling covers were installed on the built-in recycling containers in LaFortune Student Center near the Huddle Mart to remind students to recycle.

In total, 154 tons of recyclables were diverted from the landfill during the eight week competition, and the campus recycling rate was an average of 33.25%. Full results for all participating schools can be viewed here.