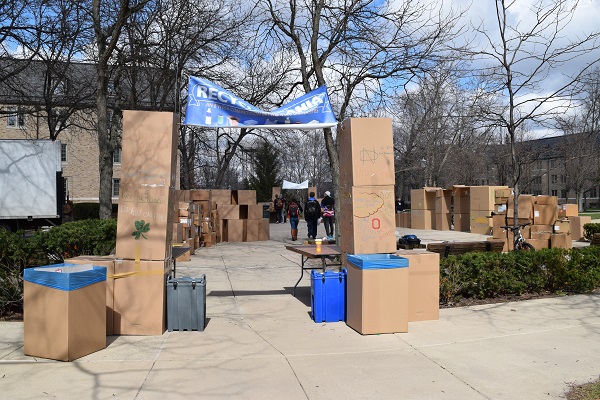 Frequenters of North Quad may have been a bit puzzled last Friday at the presence of a cardboard box fort on Fieldhouse Mall. Situated in the choke point between North Quad and Lafortune Student Center along the heavily trafficked arterial route to DeBartolo Hall, the cardboard fortification confronted students on their way to and from Friday classes. 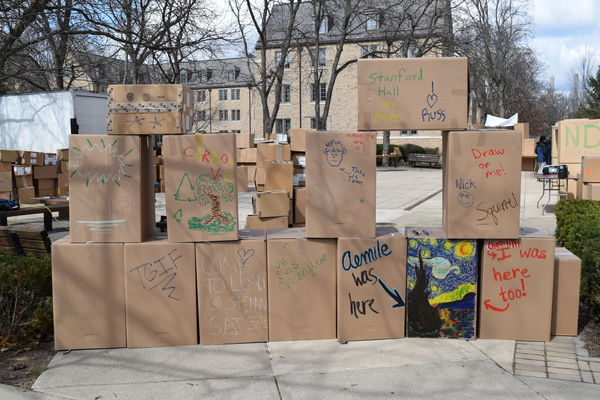 Students passing through were invited to draw on the fort with pastels and paint markers, both to express their creativity and share tips for sustainable living. Sky blue banners hoisted above the north and south entrances to the fort announced the impetus for its construction, the annual RecycleMania tournament.

The RecycleMania tournament is a competition between over 600 colleges and universities across North America to achieve the highest campus recycling rate. Schools track the ratio of recyclables to trash in their waste stream departing campus for eight weeks during the months of February and March, with winners crowned in April. The tournament also serves as an opportunity to promote recycling to the student body, and what better way to do so than by building a fort out of recycled cardboard boxes?

The tradition of building cardboard box forts as part of the RecycleMania competition began in 2012 at Brigham Young University in Utah, with a fort made of 734 boxes. Months later, students at the University of Nevada – Las Vegas, set out to break BYU’s record with a record of their own: a fort made out of 931 boxes. So began a spirited rivalry between a wide array of schools, with Harvard and Duke to University of Tennessee and Rensselaer Polytechnic joining the fray. Notre Dame’s modest contribution to the tradition measures in around 200 boxes. 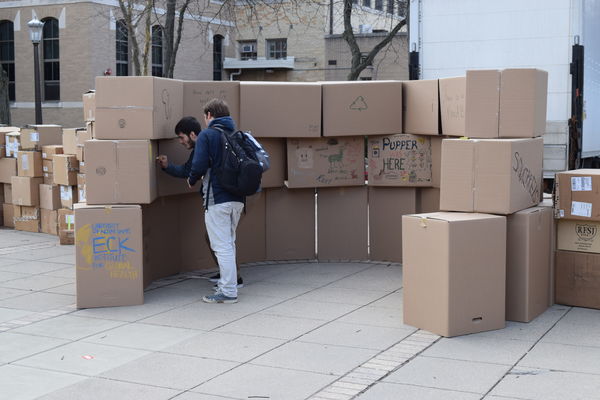 Max Ducey, an intern at the Office of Sustainability and the master builder behind the fort, is proud of Notre Dame’s inaugural contribution to the competition. “All thing considered, I think the fort was a big success” says Ducey, “Given that we had fewer than a dozen volunteers, I’m proud of what we accomplished.”

The fort, constructed out of used cardboard boxes collected from the Hammes Bookstore and multi-use boxes from the ND Recycling warehouse, faced adversity during its initial construction as strong wind gusts toppled the towers at the north and south entrances.  “I think this project presents a great opportunity for future years, and I’d really like to see the event continue bigger and better than ever next year” says Ducey.

While the current record of a fort constructed out of 12,301 boxes may be out of reach for Notre Dame, the project certainly has room to grow, continuing to spread the message of recycling and RecycleMania to the student body. The University eagerly awaits the results from this year’s competition, which finishes next week.