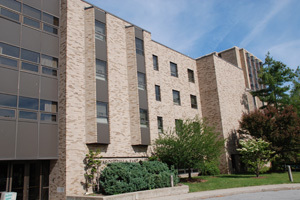 PE has taken an early lead in the 2009 Dorm Energy Competition. Zahm is in second place, followed by Howard, Walsh, and Pangborn. Sr. Cynthia Broderick, Rector of PE, attributes their success to “being intentional about the little things, like turning lights off and unplugging electronics”.

“Our strategy so far has been to unplug as much as possible…lamps, microwaves, TV’s, especially in the lounges,” says PE’s environmental commissioner Meehan Lenzen. “I think we have gotten a lot better about keeping the lights off in the bathrooms and lounges when they’re not in use too. Sr. Cindy’s room is strategically located near the elevator, which gives her ample opportunities to discourage its use.”