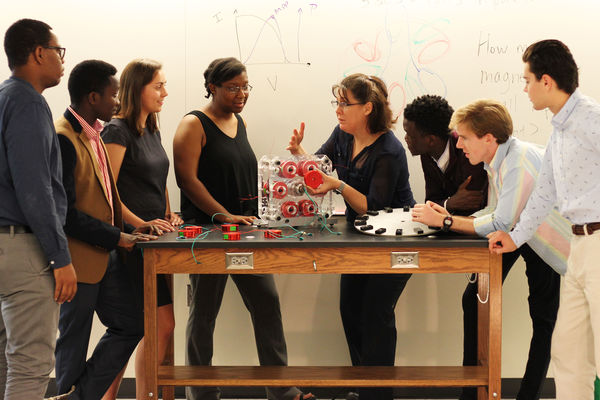 At the University of Notre Dame, the Energy and Sustainable Development with Design (ESDD) Research Lab looks at different ways to empower people from developing countries. Undergraduate students in the lab focus their research efforts on overcoming unreliable energy challenges, empowering sustainable development, and ethical commitments to equality through co-publishing and funding.

“Within the ESDD Research Lab, our goal is to include students from a variety of backgrounds – including physics, engineering, and business – to decipher the different ways we can support the energy needs in ‘so-called’ developing countries,” said Abigail Mechtenberg, assistant teaching professor in the Department of Physics, ESDD principal investigator, and international sustainable development researcher for ND Energy. “By considering the interconnections between economics, health, and energy, students have been able to do research on energy systems that break typical research silo barriers towards transformative paradigm shifts.”

For Brady McLaughlin (’19), this meant considering the economics of electricity and the healthcare system through a previously undefined risk chart. McLaughlin’s research equated the value of a statistical life based on the cost of an electricity shortage due to common unreliable systems around the globe.

“For this study, the goal was to comprehend the value of a life based on what happens when there isn’t enough supply to meet the energy demand at a hospital, likely resulting in a blackout and realistically life lost,” said McLaughlin, a Glynn Family Honors student majoring in physics and medicine with a minor in energy studies. “An energy shortage can result in the failure of medical equipment, including if it occurs mid-surgery, increasing patients’ risk during this medical procedure.”

McLaughlin shared that once the value of a statistical life is known, it can be compared to the cost of energy and help justify the need to build a new energy generation system for a hospital. Developing different energy generation systems is the major focus of the Energy Education, Engineering-design, and Entrepreneurship (Energy E3) program, which was created by Mechtenberg. As a part of the program, undergraduate students and researchers work with counterparts in various countries to bridge the energy availability and reliability gap.

Typically, that work consists of developing different energy generators with energy teams and by creating mini-grid systems. In Nigeria, Musodiq Ogunlowo, an undergraduate student in the Department of Electrical Engineering, participates in the Energy E3 program by working with two energy teams in his home country. In order to better meet energy needs, first Ogunlowo and his research team at the University of Lagos and Federal University of Technology, Minna, must consider the energy load on a given system as well as potential capacity shortages.

“When I am working with my two energy teams in Nigeria, this also includes collaborating with professors, students, and technicians to co-design energy systems that use hydroelectric generators, table generators, wind turbines, and more,” said Ogunlowo.

Using Homer Pro, a software developed by the National Renewable Energy Laboratory, Ogunlowo then leads his energy teams to use their new energy devices to see what gaps in the system they can fill in order to prevent or overcome a shortage, all based on the parameters previously explored.

Similarly, Perfect Mfashijwenimana, an undergraduate student in the Department of Electrical Engineering, leads an energy team in collaboration with the University of Rwanda. He supports the development of improved energy systems by looking at the applicability of different energy generation systems.

“In Rwandan rural areas, most shops close by 6 p.m. because that’s when the power is turned off. So, the idea of being able to design entrepreneurship opportunities around generating local power in new ways was really meaningful,” said Mfashijwenimana.

The goal of this work is to create locally-built energy systems that are competitive with existing energy production. Together, these energy systems make up an Energy E3 Innovation Center, which could be showcased during the 2020 United Nations’ SEforALL Forum.

Francois and his two energy teams are considering the possibility of sharing energy between homes in order to minimize energy loss during transmission, as well as a systematic approach to designing energy systems with backups for up to 50% cost savings. Through these methods, the energy teams could potentially better optimize existing energy mini-grids, as well as design future energy grids tailored to the communities they serve.

Additionally, Francois is comparing energy optimization objective functions with Mechtenberg using her hybrid vehicle powertrain design and new optimization energy algorithms. These algorithms related to micro-grids were presented at the International Conference on Applied Energy at MIT for the MIT A+B 2019.

Further, a part of the Energy E3 program and ESDD lab, Janaya Brown, an undergraduate student in the Department of Aerospace and Mechanical Engineering, learned from Ugandan women how to use banana, papyrus, and raffia fibers to weave blades for wind turbines based on Mechtenberg’s co-designs. By using her engineering education, Brown has been able to document the mechanical, economic, social, and environmental properties of the blades. She co-published this research with Makerere University professors and students in alignment with the ESDD Research Lab’s energy ethics collaborative commitment, which Brown believes is vital.

“It’s amazing to work with these Uganda women because they are taking an impressive centuries-developed skill they need to support their income – weaving – and are using it to fulfill a completely different need: energy production,” said Brown, who is also minoring in energy studies. “Although 3D weaving is an undervalued engineering skill, these women have been using it for generations and what they’re doing to support wind energy production is on the cutting edge of engineering sustainable design.”

Kalule Guwatudde, undergraduate student in the Mendoza College of Business, joined the ESDD Research Lab with the two-fold goal of running an energy-focused incubator competition with members of five Ugandan Energy E3 teams. Together, these team members use an asset-based international development paradigm, which includes an auto mechanic, electrician with solar certification, welder, metal-fabricator, rewinder, and electrical and mechanical engineers.

“For two years in Uganda I worked to create a pay-as-you-go energy system using solar panels. It wasn’t until I came to Notre Dame and joined the Energy E3 program that I learned about the business of energy and why mini-grids could actually better serve as an energy source,” said Guwatudde. “Now I know mini-grids are a more viable energy entrepreneurship idea, as it can leap-frog the centralized grid into a renewable energy smart grid based on maximizing locally sourced materials and expertise, based on local renewable energy sources.”

Beyond energy research, Mechtenberg’s students study a variety of topics that can shed light on income growth. For Anne Stratman, this meant looking at how income distributions change over time for her senior honors physics thesis. Stratman (’19) used econophysics – applying physics modeling in economics – to understand how when people started with the same amount of money and randomly exchanged it, inevitably the wealth distribution became unequally dispersed.

Stratman then looked at how different taxes – income, sales, and wealth – as well as public spending could impact inequality over time and at different rates, with the goal of defining symmetry breaking in capitalism. For this, instead of using a single Gini coefficient, a coefficient that defines a deviation from an equitable capitalistic system, she shifted towards understanding three Gini coefficients, which illustrate how capitalism is breaking and the strength of the symmetry breaking overtime. This could lead to a model describing symmetric and unsymmetric capitalist systems.

“In this research, three different classes developed as seen in traditional economic understanding: a lower, a middle, and an upper class,” said Stratman, a Brennan Family Scholar. “The econophysics model we used is meant to simulate actual data about tax rates and public spending. With it, we could calculate the strength and directional force of the economic system to keep a group from moving from any class to another. It is not about being unfair or inequitable, it is about the current system potentially being broken.”

This research project showed that out of the tax options, the wealth tax was the best at reducing inequality between the classes. Stratman said that, overall, she was surprised by how much inequality was shown. She plans to continue studying applied physics in graduate school at the University of Michigan this fall.

The University of Notre Dame is a private research and teaching university inspired by its Catholic mission. Located in South Bend, Indiana, its researchers are advancing human understanding through research, scholarship, education, and creative endeavor in order to be a repository for knowledge and a powerful means for doing good in the world. For more information, please see research.nd.edu or @UNDResearch.

Originally published by Brandi Klingerman at research.nd.edu on July 01, 2019.