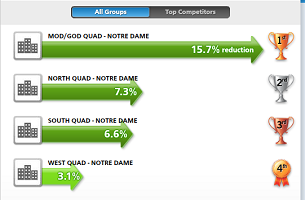 Mod and God Quads are the winners of the first-ever Quad Energy Competition, finishing with an impressive 15.7% reduction in electricity usage over the course of the three-week competition. The residence halls that comprise the winning team are Carroll, Knott, Pasquerilla East, Pasquerilla West, Siegfried, Sorin, St. Edward’s, and Walsh. These dorms will share a $1,000 prize.

“The residents of Knott Hall did a lot to help save energy,” said Jack McLaren, Knott’s Sustainability Commissioner. “A lot of us kept our windows open instead of turning on the A/C, and for a while we had all the lights in the hallways off at all times.”

“Everyone in St. Ed’s worked hard to reduce our energy rates and win the competition,” added Patrick Rahill, St. Ed’s Sustainability Commissioner. “I saw everyone turn off lights when they left their rooms and unplug their refrigerators when they left for break.”

The competition took place from March 10th through March 30th. Each dorm was ranked based on how much electricity it conserves relative to a baseline collected for the second half of February 2012. North Quad took second place with a 7.3% reduction. South Quad followed with a 6.6% reduction, while West Quad ended in fourth place with a 3.1% reduction. In total, the 29 dorms saved over 57,000 kwh, equivalent to 80,000 pounds of carbon dioxide emissions.

New state-of-the-art meters and a new online dashboard enabled students for the first time to see how much energy their dorm is using and how they rank in the competition at any time. The interactive dashboard was created by Lucid Design Group, a software company that specializes in information feedback that inspires energy and resource conservation. The dashboard engages students not just by providing regularly updated data, but also by giving students a social media-based forum to commit to energy-saving behaviors and share winning strategies.

The savings accrued by the residence halls through the Quad Energy Competition have been entered into Campus Conservation Nationals (CCN), a nation-wide energy competition hosted by Lucid Design Group in collaboration with the National Wildlife Federation, Alliance to Save Energy, and the USGBC Center for Green Schools. Nearly 250,000 students at 150 colleges across the U.S. and Canada are participating in CCN 2012 this spring. Collectively, they have already exceeded their goal of saving one gigawatt (one billion watts).