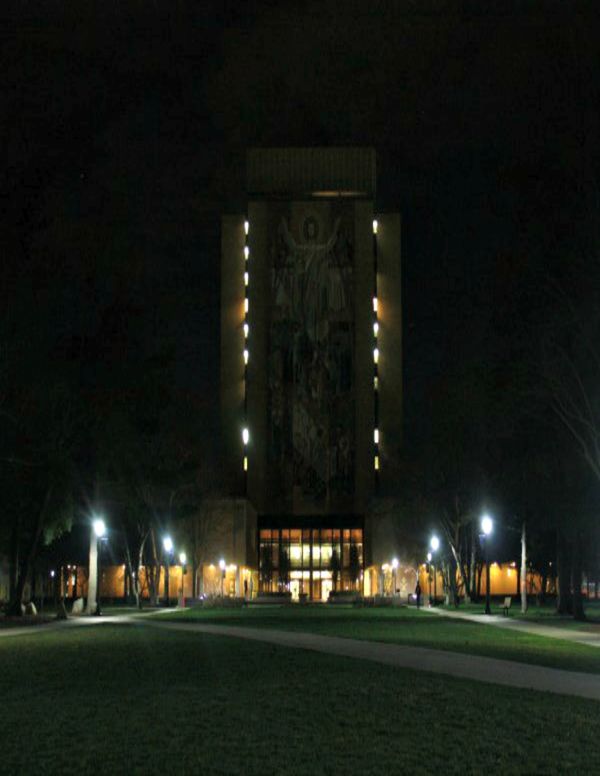 On Saturday, March 25 from 8:30 – 9:30 PM, Notre Dame will once again participate in Earth Hour by turning off the lights on the Golden Dome and the Word of Life Mural on Hesburgh library.  Across the world, leading institutions and municipalities will turn off the lights of iconic buildings and structures to show their solidarity for fighting climate change.  Last year alone, 178 countries and territories switched off their lights in solidarity, participating in the single largest symbolic mass event, including some of the world’s most iconic landmarks such as Sydney Opera House (Sydney), Big Ben and the Houses of Parliament (London), the Tokyo Tower (Tokyo), the Empire State Building (New York), Marina Bay Sands Hotel (Singapore), the Eiffel Tower (Paris), and St. Peter’s Basilica (Rome).

This year marks the eleventh anniversary of Earth Hour.  In addition to lights out on the Golden Dome and the Word of Life Mural, Rev. Terrence P. Ehrman, C.S.C., will preside over a candlelight Mass at the Grotto.  In the event of rain, Mass will be held in the Keenan/Stanford Hall Chapel.  Not going to be on campus?  We encourage you to participate from wherever you may be by turning off the lights in your home and take a moonlit stroll, enjoy dinner by candlelight, or simply enjoy the peace and quiet that can be found when we power down ourselves and our lights.

To celebrate this year’s Earth Hour, and as part of the annual Megawatt Madness energy-reduction competition, the Office of Sustainability will host a glow-in-the-dark Frisbee competition from 6:00 – 9:00 pm on March 31st on the south quad and a bonfire on Holy Cross Hill on April 6th.

Our actions today can change our tomorrow - together, let's #ChangeClimateChange.