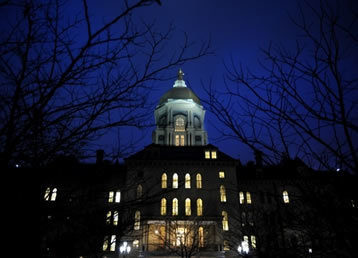 Notre Dame has committed to heating, air conditioning, and/or lighting
renovations in 24 older campus buildings during the 2008/2009 academic
year. These renovations, costing about $4 million, will reduce the
University’s emissions by over 4,000 metric tons of carbon dioxide equivalent per year.

“I don’t think in my career here at the University we’ve ever gone and
done a renovation specifically aimed at energy conservation before,”
said Paul Kempf, Director of Notre Dame’s Department of Utilities.
“When we do an overall renovation, we include the efficiency upgrades,
but these older buildings would have waited up to 25 years for an
overall renovation. They’ll be a 6-7 year payback for this project,
but we’re not doing it strictly for the economics. We’ll be reducing
our carbon footprint.”

The planned renovations include installing occupancy sensors so that
heating, cooling, and lighting only run when buildings are occupied,
enhancing ventilation control so that the amount of outside air
brought in matches the occupancy level of the building, and putting in
more efficient fluorescent bulbs. This project is part of an overall
campus plan to reduce carbon dioxide emissions, which contribute to
climate change. The overall strategy, said Kempf, is to “take the
low-hanging fruit and reinvest the savings to reduce our energy
consumption even more.”