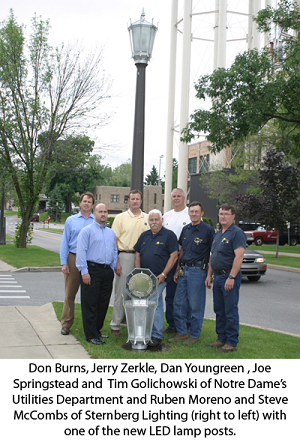 Less obvious are the benefits to those who use the observatory at Jordan Hall. The old lamp posts had glass tops, with the result that approximately 30-50% of the total light output was directed upward, making it more difficult to see the stars. The new LED fixtures have solid tops, allowing only 0.5% of the total light output to be directed upward.

“The new lights are a huge improvement,” said Peter Garnavich, professor of astrophysics. “People at the observatory no longer directly see the bulbs, so all the light reaches the observatory indirectly. And the amount of light going straight up is much reduced.” The new lamp posts also meet LEED green building requirements for minimizing “light pollution” of the night sky.

The LED lamp posts, designed and manufactured by Sternberg Lighting, are now standard for new construction projects on campus, and have been installed surrounding Ryan Hall, Geddes Hall, Stinson-Remick Hall, and multiple athletic facilities. All of the lamp posts along the sidewalks in Eddy Street Commons also utilize LED technology and were designed and manufactured by Sternberg as well.

The retrofit project was funded by the Office of Sustainability’s Green Loan Fund with an estimated payback of 10 years. The payback for LED lamp posts in newly constructed areas is 6 years.