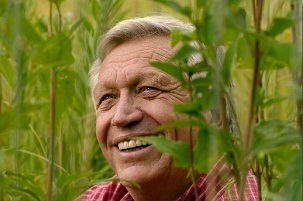 Wes Jackson, a visionary and pioneer in sustainable agriculture, will be speaking on campus at 7 p.m. on Wednesday, March 28, in Jordan 101.

“What is most exciting about Dr. Jackson work is how it benefits both people and nature,” said Jessica Hellmann, Associate Professor of Biology at Notre Dame. “Dr. Jackson’s work reminds us how central agriculture is to sustainability—we have to find ways to feed the world without degrading the land for our kids and grandkids.”

For over 30 years, Jackson has led the Land Institute, a nonprofit educational and research organization devoted to Natural Systems Agriculture. The institute’s research is focused on agricultural practices that mimic nature, rather than dominating or ignoring it, and developing new plant breeds that act like wild plant species while providing food like farmed crops. Its work addresses a wide range of challenges facing industrial agriculture, including soil erosion, climate change, and pesticide resistance.

“Wes Jackson has made it his life’s work to take modern agriculture and turn it on its head, to the immense benefit of both human society and the planet,” said Sara Brown in the Office of Sustainability. “Jackson has had a transformative impact on the way we perceive our relationship to plants, soil, and the natural world as a whole.”

Jackson is the author of several books, including New Roots for Agriculture and Becoming Native to This Place, and is widely recognized as a leader in the international movement for a more sustainable agriculture. In 1990, he was named a Pew Scholar in Conservation and the Environment. He received a MacArthur “genius” award in 1992, and in 2000, a Right Livelihood Award—the alternative Nobel Prize presented annually in Sweden.

Jackson earned a bachelor’s degree from Kansas Wesleyan, a master’s degree from the University of Kansas and a doctorate from North Carolina State University. He established and served as chair of one of the country’s first environmental studies programs at California State University, Sacramento, then returned to his native Kansas to found the Land Institute in 1976.

Jackson’s lecture, titled Why Agriculture Must Take the Lead Toward a Sustainable Future, is free and open to the public, and a reception will follow. It is the inaugural installment of the Lecturer in Sustainability program, an annual event organized by the Minor in Sustainability.

A previous version of this article was published by William G. Gilroy at newsinfo.nd.edu on March 15, 2012.