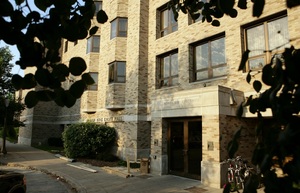 By Sara Felsenstein for The Observer

The energy competition, hosted by the Office of Sustainability, began Nov. 1. This year focused on reducing “vampire energy”, the power that is sucked by most electronic devices even when they are turned off.

“All the dorms together saved 13 percent, equivalent to $9,250 or 259,000 pounds of carbon dioxide emissions,” Rachel Novick, education and outreach programs manager at the Office of Sustainability, said. “This is more than we have saved in any previous Dorm Energy Competition, which shows that we are getting broader participation across the campus than ever before.”

Stewart said Knott also saved energy by unplugging all electronics other than the refrigerator over Thanksgiving, using cold water in the washing machines, and leaving lights off whenever possible.

He said he was impressed by the commitment and dedication his fellow Knott residents had to the competition.

“Throughout this whole month I’ve only seen people using the elevator a few times, and pretty much everyone was on board with it,” he said. “Sometimes people would even be in the room with the lights off.”