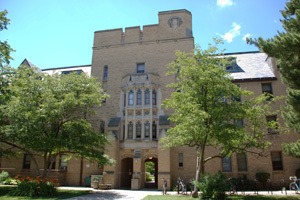 Howard Hall has emerged the winner of the fiercely contested Kill-a-Watt Energy Competition.
Howard’s 52% reduction from its baseline was the best performance to date in Notre Dame’s five-year history of dorm energy competitions. The competition overall achieved a new level of success as well, with more than half of the dorms on campus achieving over a 20% reduction. Together, the 29 campus residence halls saved a total of 43,547 kilowatt hours and avoided 60,965 pounds of CO2.

“Enthusiasm from the whole dorm was key. I sent out an email on the Howard listserv every day with an update on our rankings and an Energy Tip of the Day,” Said Sarah Cahalan, Sustainability Commissioner of Howard Hall. “We promoted alternative study spaces – lots of freshmen held impromptu hallway study parties throughout the week – and communal TV watches. Signs went up in all the bathrooms with tips about saving energy in the showers and notes like, ‘Do you really need that light on to wash your hands?’”

Howard Hall will receive $1,500 in Energy Star appliances donated by GE and the entire dorm will be treated to a chalk-talk and reception with Coach Jeff Jackson of ND Men’s Hockey. “I think a lot of girls (and the hall staff) were very excited by the idea of a stove that doesn’t burn everything we put in it,” commented Cahalan. 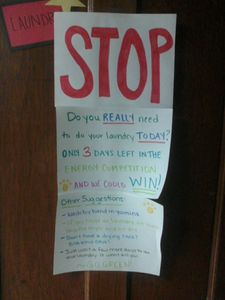 Fisher Hall took second place with a 44.9% reduction and Lyons Hall took third place with a 37.9% reduction. “After the first day or so of the competition we saw that we were in second place. And who was in front of us? Howard: our sister dorm," said Stephen Elser, Sustainability Commissioner of Fisher Hall. "There’s nothing like a good old fashioned sibling rivalry to motivate people to do something. Everyone kicked it into gear and unplugged and turned off practically everything. People even unplugged our water fountain. People took showers in the dark. It was incredible.”

“I consolidated all of the food from our two refrigerators into one, and unplugged the other and we unplugged all of the machines in the workout room,” said Tessa DeMers, Sustainability Commissioner of Lyons Hall. “I tried to encourage people to keep their lights off in their rooms and use natural light as much as possible.”

Fisher and Lyons will each receive a trophy containing an autographed puck from Coach Jackson and a basket of edible treats for the dorm to share. The complete results of the competition can be viewed on Notre Dame’s Energy Dashboard.