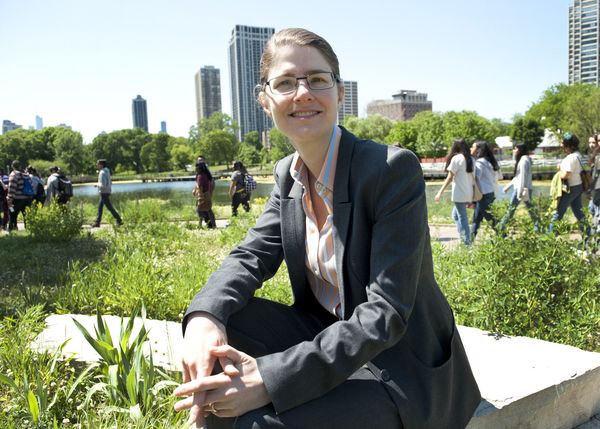 Karen Weigert, Chief Sustainability Officer of the City of Chicago, spoke to a packed room in Fitzpatrick Hall on Tuesday on the topic of “Sustainability in Chicago: A Livable, Competitive and Sustainable City."

The first step toward reducing emissions from energy usage is energy conservation, explained Weigert. Dozens of office buildings and hotels, as well as the Shedd Aquarium, are participating in the city’s program to improve building efficiency. “Chicago has the most LEED buildings of any city in the world,” said Weigert. 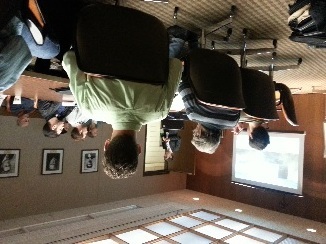 The second step is to green the energy sources being used to power the city. “We’ve created a one-stop shop that leads city residents through the process for permitting and installation of solar panels. It’s easier for the city and people can get their permit in a matter of days,” explained Weigert. “We closed the two coal-fired power plants that remained in the city, and have elected to purchase only coal-free power and to double the amount of wind power. A lot of that wind power is locally produced in Illinois.”

One of Weigert’s goals is to integrate sustainability with economic development and neighborhood improvement. Old freight train tracks have been converted to greenways, while zoning laws have been modified to allow urban agriculture in neighborhoods that lack access to fresh produce. “The Chicago Greencorps Youth Program is a partnership we developed with high schools in challenged neighborhoods,” said Weigert. “Students get paid summer jobs working on sustainability projects for the city. For half of the 600 students who participated so far, it was their first job ever – they are the future of the city’s green work force.”

Chicago is also working to adapt to the effects of climate change. “One of the most serious effects we face is increased heat waves, which put our elderly and low-income residents at risk,” said Weigert. Solutions include white roofs to reflect more heat, targeted tree planting, and a program in which residents check on neighbors during heat alerts. The city is also using permeable pavement to reduce the impact of more intense rain events on the storm water system.

Weigert formerly served as Senior Vice President of ShoreBank, where she built a national consumer group that supports environmental sustainability and community development in low to moderate income urban neighborhoods.  She was previously a strategy consultant at McKinsey, where she worked on topics including transportation, finance, energy and land use. Weigert served as an appointee in the Clinton administration, focusing on global environmental issues and agriculture. She is also a co-producer of the documentary film Carbon Nation, which explores innovative ways to address climate change.