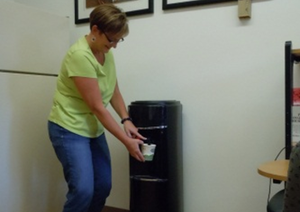 The Department’s Senior Administrative Assistant, Rhonda Singleton, was influential in getting the system installed. “Before the installation, we were going through ten or more water jugs a week,” Singleton said. “Initially we switched to a tap filter but weren’t happy with the taste or the temperature. With the main-line system, we don’t have either of those problems.”

This saves more than space: there’s no longer any need to pay $3.95 per jug, plus there is less labor involved. “Now that we have the main-line system, we no longer have to carry the heavy jugs which sometimes got spilled, and the water tastes great,” said Singleton.

There is no charge for the installation of the system. However, there is a monthly fee of $29.95 which includes scheduled maintenance, filter replacements, and repairs if needed. If your office is going through more than eight five-gallon jugs a month the system will actually save you money.