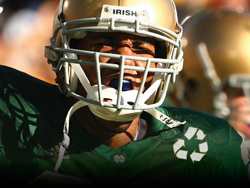 On November 22nd, the last home game of the season made Notre Dame history as the first carbon-neutral game played in the House that Rockne Built. All of the carbon emissions produced by stadium energy use as well as fan travel, hotel stays, and visiting team travel were offset by energy conservation projects coordinated by the Office of Sustainability during its first semester on campus.

Many of the offsets stemmed from student-led conservation efforts, including the CFL Upgrade, the Dorm Energy Competition, the Reusable Grab ‘n Go Bag Raffle, and Game Day Recycling. "Many people don’t realize how much energy is saved by recycling," said Erin Hafner, Programs Coordinator in the Office of Sustainability. “But the 65 tons of recycling we have collected over the course of the football season actually translate into 144 metric tons of reduced carbon emissions.”

Making the game carbon neutral was only one of the green initiatives surrounding the Syracuse game, which coincided with NBC’s annual Green Week. NBC is hosting an eco-competition between Syracuse and Notre Dame; the school that has the most team members making commitments to lead greener lives by the end of November wins $10,000, which will be used to enhance sustainability efforts on the winning campus.

In the week leading up to the Syracuse game, the Office of Sustainability, GreeND, and the Sustainability Commissioners again teamed up to bring improved efficiency to the residence halls. An additional 3,000 compact fluorescent light bulbs were distributed to those students who did not receive any in the CFL Upgrade of September 28th. In addition, students got an energy audit of their dorm room that addressed everything from the power settings on their computer to the reliability of their thermostat.

The game may be over, but you can still help beat Syracuse by joining the Fighting Irish team by November 30th.