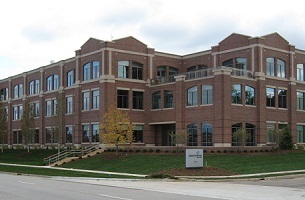 “Innovation Park is intended to foster cutting-edge ideas and technologies,” said Heather Christophersen, Director of Sustainability. “LEED design and construction fits right in with this culture of innovation by encouraging continuous improvement in green building.”

A well-insulated building envelope in combination with highly efficient mechanical and electrical systems were designed and installed to create a building which will achieve an energy savings of 17% over comparable buildings. A white roof was installed to reflect heat in the summer, reducing the amount of energy necessary to cool the building. Occupancy sensors turn lights and additional ventilation off when users are not in a room. Condensation from air conditioning units is captured and reused within the mechanical systems, while energy is recovered from exhausted air and reused to heat or cool the building.

Water saving fixtures sinks, toilets, urinals and shower heads were installed to reduce water consumption by 49% while efficient irrigation systems reduce potable water consumption for irrigation by 52%. Furthermore, 100% of the storm water from the site is directed to a centralized settlement basin where water is allowed to percolate back into the ground.