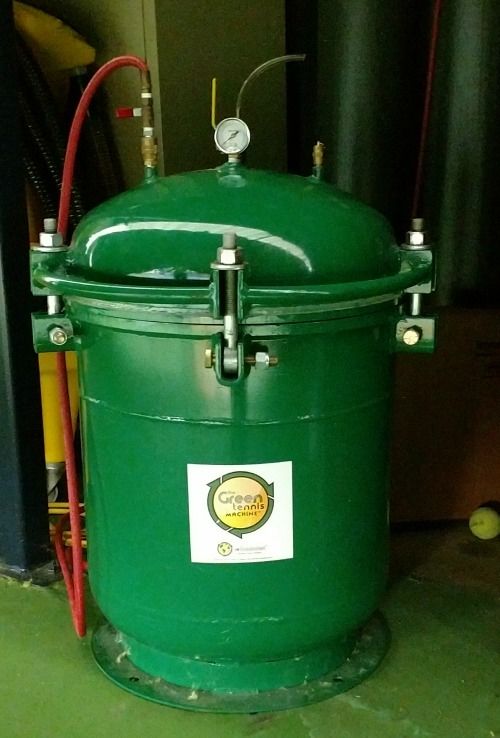 In collegiate tennis, a new can of tennis balls is used every set - or approximately 12-18 cans per match.  At 18 cans of balls (3 balls at $4 per can), $72 and 51 balls are consumed per match.  Multiply that by the number of matches played each year – that’s a lot of resources in money and materials going to just tennis balls alone.  Coach Bobby Bayliss, Manager, Notre Dame Tennis Facilities, thought there has to be a better way to make use of department funds and be more sustainable at the same time.  He began to look into what other universities were doing to conserve their tennis ball usage and his research lead him to the Green Tennis Machine (GTM).  The GTM revives used tennis balls so they can be used even longer and reduces the need to buy additional tennis balls.  The GTM uses a combination of inert and non-flammable gases in a pressure chamber to restore the bounce height of used tennis balls and can recondition approximately 500 balls at one time for extended play.

The GTM is used by the Notre Dame’s men’s and women’s tennis teams approximately 20 times a year, equaling around 10,000 tennis balls that are being diverted from the landfill.  Several tournaments also use the courts throughout the year, leaving behind their used tennis balls that are also repurposed.  But that is not the end of Coach Bayliss’ sustainable routine.  Once the tennis balls reach a point where they can no longer be reconditioned and used for college game play, many are donated to area nursing homes where they become a “wheel” on a walker.  Other local charities also benefit from his recycled tennis ball program as well.    Coach Bayliss and his staff don’t just stop at donating used tennis balls, either.  The metal seal ring inside of the cans are collected and taken to a local facility where they are weighed and separated, and the funds from the recycled lids are credited to the Ronald McDonald Rooms at Memorial Hospital.