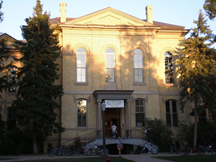 The Huddlemart has also made the switch to biodegradable shopping bags. Due to their light weight, plastic bags often get blown away from garbage dumpsters and landfills and end up in oceans and waterways, where they take centuries to degrade. Sea turtles and other marine life mistake them for food and as a result, thousands of animals choke to death each year. Biodegradable bags, in contrast, dissolve in about 18 months and aren’t toxic to marine life.

Last but not least, Starbucks is expanding promotion of the 25 cent discount that is given to everyone who brings a reusable mug. “If everyone brought reusable mugs to Starbucks,” said LaBella, “we could save 275,000 cups a year.” That translates into about 70,000 pounds of avoided carbon emissions. Discounts for bringing a reusable mug are also available at other eateries around campus, including Reckers and Grace Cafe.