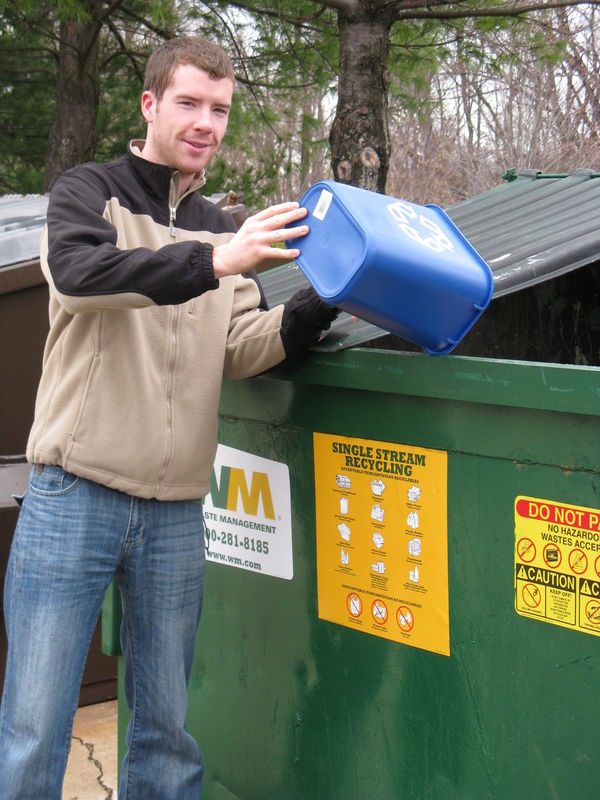 Being a green graduate student has just gotten easier with the addition of new recycling dumpsters next to all of the trash dumpsters at the Fischer O’Hara-Grace (FOG) Graduate Residence Complex. Previously, FOG residents had to haul their recyclables to a single dumpster far from the complex. Now recycling is as convenient as taking out the trash. Following the university standard, the dumpsters are single stream, which does not require sorting of recyclables by material.

Rector Mimi Beck is excited about the changes happening at FOG. “I hope that this will encourage more of our students to adopt sustainable practices – the easier we can make it, the more likely they are to do it,” says Mimi. Mimi says she has received about a dozen emails from FOG residents expressing their thanks for the convenience the dumpsters provide. With 234 apartments and townhomes, the new dumpsters are expected to increase recycling rates at FOG and for the university as a whole.

The new recycling dumpsters are part of a broader sustainability effort at FOG. Residents are working with the Office of Sustainability to get recycling bins in each apartment, to increase signage that makes residents aware of more sustainable living options, and to install outdoor clotheslines in the green space between buildings. Air drying clothing could dramatically reduce energy usage if used in place of electric laundry dryers. FOG resident Monica Mody put it simply, “This is awesome!”