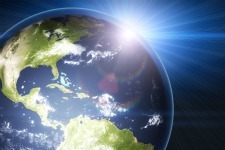 The extreme lateness of this year’s Easter season brought about a strange coincidence on the calendar: Good Friday fell on April 22, the date celebrated internationally as Earth Day. Such a coincidence is truly a rarity – the next time Earth Day falls during Holy Week will be in 2038, when it will coincide with Maundy Thursday.

The media and many Christian groups largely portrayed the two holidays as competing and even antithetical events. The Media Research Center’s Culture and Media Institute highlighted the tensions leading up to the double holiday in its report Holy Week: Media Worship Earth Day, Attack Easter. There was even considerable brouhaha over Google’s decision to change its logo to an environmental theme for the day, rather than choosing a theme that would acknowledge the religious holiday. Some groups chose to avoid the “conflict” entirely and hold Earth Day celebrations on alternative days. The Catholic government of the Philippines, for example, officially postponed its recognition of Earth Day until April 25th.

However, many Christian, and especially Catholic, groups affirmed the connection between Good Friday and Earth Day, taking this coincidence as an opportunity to reaffirm the call to care for Creation. The Episcopal Church was one of the first groups to publish a statement encouraging its faithful to consider the implications of celebrating the two holidays together:

“This year, Earth Day falls on Good Friday–a profound coincidence. On the day we mark the crucifixion of Christ, let us remember that when Earth is degraded and species go extinct, a part of God’s body experiences a different type of crucifixion, and another way of seeing and experiencing God is diminished.”

In a similar vein, the Catholic Climate Covenant, a coalition organization that includes the U.S. Conference of Catholic Bishops, offered the following reflection on Friday through its Facebook page:

“Today, we remember that Jesus was crucified because of the sinful choices of fallen humanity. 2,000 years later, how do we participate in the Death of Jesus through sinful choices which harm Creation and, in turn, human life and the poor with whom Jesus identifies?”

Thus, although some sought to portray the two holidays as strange bedfellows forced to share a date out of historical anomaly, many faith groups suggested that Good Friday and Earth Day may in fact be a match made in Heaven, reinforcing the depth of Christ’s sacrifice.