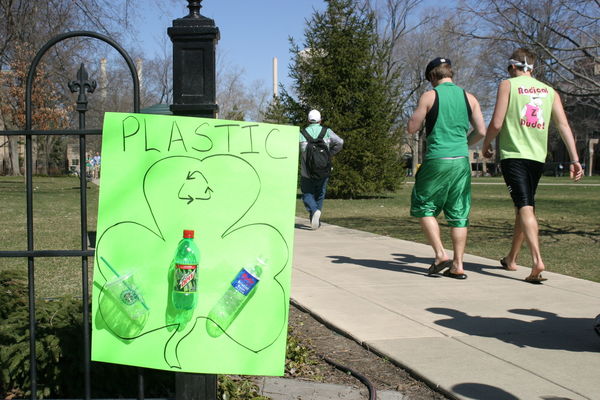 On St. Patrick’s Day everyone is Irish and everyone is green. The Fieldhouse Mall outside LaFortune was buzzing with aspiring leprechauns and free food during SAO’s annual St. Patrick’s Day Party. The Office of Sustainability also made an appearance at the event to promote Recyclemania. Recyclemania is a ten week competition between universities across the country to see who can recycle the most. This year there are over 450 schools vying for the glory of being crowned the Recyclemania Champion.

The Office of Sustainability planted a field of shamrocks on the lawn along the Fieldhouse Mall sidewalks. Each one was dedicated to a specific recyclable material: paper, plastic, Styrofoam, glass, and aluminum. Office of Sustainability Intern Connor Kobeski ’10 says, “The display is a friendly reminder that nearly everything we throw out on campus can and should be recycled.” One of the clovers identified batteries, printer cartridges, and CFLs as recyclable, but noted that they must be put in special collection containers instead of the Single Stream bins.

Notre Dame competes in two Recyclemania categories and is holding strong at the head of the pack thus far in the competition. The Irish have consistently placed among the top 20 in the weekly ratings for the Gorilla Prize, which is awarded to the school that can collect the highest gross tonnage of post consumer recyclables. Notre Dame is also a contender for the Per Capita Classic, which goes to the school that collects the most recyclables per person.

Since the completion began two months ago, the Irish have accumulated an impressive 19.98 lbs. per person. Now that’s something to boast about, given that ND rivals Purdue University (8.73 lbs. per person) and University of Michigan, Ann Arbor (7.95 lbs. per person) are lagging far behind. The competition ends Saturday March 27, but recycling at ND is here to stay.