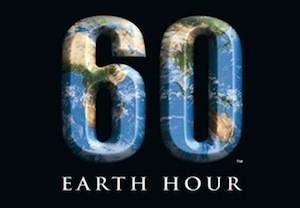 On Saturday, March 23 from 8:30-9:30 pm, this year’s Earth Hour will be observed by over one billion people in more than 150 countries and 7,000 communities. Lights will be turned off on such iconic landmarks as the Empire State Building, the Great Pyramids of Giza, the Parthenon, the Eiffel Tower, and St. Peter’s Basilica at the Vatican.

As in years past, Notre Dame will participate in Earth Hour by turning out the lights on the Golden Dome of the Main Building and the Word of Life mural on the Hesburgh Library for the entire weekend. Participation is expanding this year throughout the South Bend community as well: the old State Theatre (“The State”) will turn out its marquee to raise awareness downtown. Indiana University South Bend will also turn out the lights in the Student Activity Center and in the Franklin D. Schurz Library.

“Since its inception in 2007, Earth Hour has become an international symbol of support for climate change action,” said Myles Robertson of the Office of Sustainability, who is co-organizing a virtual event called Earth Hour South Bend: Local Meets Global to encourage city-wide participation. “We encourage every member of the community to participate in Earth Hour by turning off the lights at 8:30 on Saturday evening and by making a long-term commitment to conserve energy.”

Two weeks after Earth Hour, Notre Dame will host a multidisciplinary conference titled Climate Change and the Common Good. “Our participation in Earth Hour and our motivation for hosting this conference reflect our values as a Catholic university,” said Robin Young, Associate Professor of Theology and lead conference organizer. “Climate change disproportionately impacts those who are poor and vulnerable – who have contributed the least to our environmental problems and have the least capacity for adaptation.”