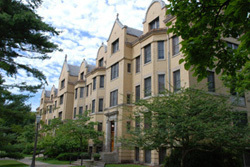 Walsh Hall is the decisive winner of Notre Dame’s first campus-wide Dorm Energy Competition, having reduced their electricity use by an impressive 31% compared to previous years. Walsh residents “took some extreme measures” to conserve energy over the last month, according to Walsh Rector Sr. Janet Stankowski. Those measures included “turning off the bathroom and basement lights during the day, unplugging the vending machines and exercise equipment when they were not in use, and sharing loads in the washing machines and driers,” added Walsh resident Jenna Heffernan.

Walsh Hall will receive $500 and an Energy Champion banner. The runners up, Breen-Phillips (19.11%) and Zahm (19.09%), will each receive prizes as well. “We installed CFL lights, turned off the shower lights during the night and midday, turned off power strips during the day – easy stuff that we don’t usually think about,” said Jonathan Slaton, Sustainability Commissioner in Zahm.

Lyons Hall (18.94%) came in 4th and Pasquerilla East (16.80%) came in 5th. Meehan Lenzen, Sustainability Commissioner in Pasquerilla East, said that her strategy was to be “very vocal about the competition. We tried to visit every room to remind residents to turn lights off and unplug things when not in use. I sent out weekly (sometimes more) email reminders with tips about conserving electricity, especially when the weekly standings were posted.”

During the competition, which ran from September 25th through October 19th, the 28 residence halls together conserved a total of 93,674 kwh, reducing the university’s emissions by 56 metric tons of carbon dioxide equivalent and saving over $4,000 in electricity costs.