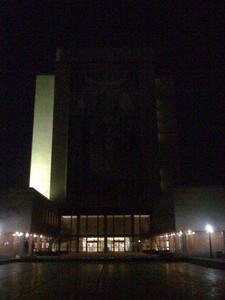 On Saturday March 27 at 8:30pm, lights went off across the Notre Dame campus and around the world. “Earth Hour unites Notre Dame with the rest of the world; by turning off the lights during this symbolic hour, we stand in solidarity with other students, national leaders, and ordinary citizens worldwide to demand action on climate change,” says Earth Hour campus organizer Lisa Bunn ’10. When the lights went out on the Dome and Touchdown Jesus, it signaled the start of a campus-wide Glow in the Dark Frisbee game involving over 50 students.

Notre Dame has participated every year since the World Wildlife Fund created Earth Hour three years ago. In 2009 people in 4,100 cities on seven continents flipped their switches, including 80 million Americans. Prominent landmarks that went dark included the Empire State Building, the Great Pyramids of Giza, the Las Vegas Strip, and St. Peter’s Basilica in Vatican City.

Each year, the Utilities staff support Notre Dame’s participation in Earth Hour by coming in on a Saturday night to turn off the spotlights on the Dome and Touchdown Jesus. In addition, GreeND and the Office of Sustainability sponsored a campus-wide Glow in the Dark Ultimate Frisbee game on South Quad. “We’re talking Team North Quad vs. Team South Quad, lights off, a glowing Frisbee, and hundreds of glow-in-the dark bracelets,” said Bunn beforehand. “It’s going to be epic.”

Learn more about Earth Hour 2010 and see who else is participating in our area. Watch this year’s Earth Hour Video here.