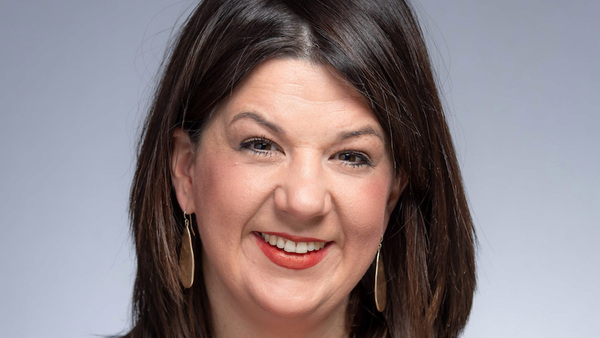 Experts from the University of Notre Dame’s Wilson Sheehan Lab for Economic Opportunities (LEO) are no strangers to testifying before congressional committees. On Thursday (July 28), Heather Reynolds, LEO’s managing director, shared her deep knowledge and expertise in social work and assessment of social programs with the House Committee on Economic Disparity and Fairness in Growth.

The committee chairman, Congressman Jim Himes, opened the hearing by noting that 70 percent of Americans report having benefited from social programs at some point in their life. “I’m particularly interested in seeing what the federal government can do to improve these programs for those who need it the most,” he said.

Congressman Bryan Steil echoed Himes’ concern and stressed that policy has a real impact on people getting back to work, but he is concerned with how to raise people into the middle class and keep them there in a sustainable way.

“Before we look at simply spending more money, we should look at evidence-based solutions that already exist,” Steil, the ranking member of the committee, said.

Conquering poverty with evidence-based solutions is exactly LEO’s wheelhouse. Reynolds drew from her personal experience as a social worker witnessing comprehensive case management make all the difference for many clients. “It is very difficult to be poor. I am a big fan of case management because I’ve seen it work and I’ve seen it through my own practice.”

Reynolds talked about real clients she and her colleagues worked with at Catholic Charities Forth Worth over her nearly 20 years at the agency. Each client’s situation was unique, because “the faces of poverty all look a bit different,” she said. In Marsha’s case, for example, she was working a $10 per hour job trying to keep her and her three kids’ heads above water. They lived in an unsafe rental with no running water. Marsha needed child care and other supports so she could get credentialed to earn higher wages. The scenario was different for Randy, a client whose disability rendered him unable to drive but wouldn’t interfere with his ability to do many jobs. His mother was unable to provide transportation for him to go to and from work. Reynolds and her colleagues were able to focus on finding him a job and a way to get there and back.

What LEO offers, Reynolds emphasized, is the ability to do real research to determine effectiveness of programs while social work experts continue to do their vital work to help those most in need.

“I’m talking about causal, not correlational evidence — the kind that tells us the direct effect of programs on the intended outcomes they are attempting to change. The evidence points to comprehensive services,” she said.

She shared some of the best examples of LEO’s research including Goodwill Excel Centers that aim to help adults earn a high school diploma and provide them with child care, transportation, life coaches and jobs. In comparison to those not enrolled, students are 11 percent more likely to be employed in the formal sector and earnings are 39 percent higher. Catholic Charities’ Padua program provides holistic case management over multiple years to move a family out of poverty. People who participated in Padua experienced a 25 percent increase in work. For those not working at time of enrollment, there was a 67 percent increase in work and a 46 percent increase in earnings.

Witness Sharon Parrott, president of the Center on Budget and Policy Priorities, compared the United States’ social systems with countries that have a similar number of children living in poverty like Australia and Canada. “We do less and our children pay the price.”

Parrott also pointed out that our nation’s current economic security programs lift a much larger share of people out of poverty than in the past, which, importantly, has narrowed the gaps between poor white people and poor people of color. She advocates expanding the child tax credit, strengthening unemployment insurance and establishing universal health care.

Looking back on the government response to economic issues caused by the pandemic, Marc H. Morial, president and CEO of the National Urban League, praised the Biden administration and Congress for “meeting the moment” with quick and broad relief measures. However, with the cutback or elimination of some pandemic-related relief, Morial worries about the most vulnerable yet again.

Two-thirds of Americans’ wages haven’t kept up with inflation, he noted, threatening to push people into poverty once again. He champions programs that help people not just survive, but thrive. He underscored, however, that many people cannot even access the programs that help them meet basic needs because they don’t know about them or how to access them and they might not have internet access.

“This is not just a question of the poorest Americans, but working-class Americans and even into the middle class,” Morial said. “They’re forced to seek assistance through these social programs. These programs serve a broader section of Americans. One of the pillars of a great nation is the respect and care for her people. We cannot leave people behind.”

Millions of Americans benefited from the expansion of unemployment insurance during the height of the pandemic. Although the staff at the Department of Labor was able to pivot quickly and provide service, Michele Evermore, deputy director for policy at the Office of Unemployment Insurance Modernization at U.S. Department of Labor, said it wasn’t without a cost. There has been a lot of staff turnover at the agency due to being overworked when serving clients. She noted that strengthening staff to ensure readiness for any future crises is paramount.

“We must invest in staff and systems. There is hope,” she said, while calling for reform in unemployment insurance and sustained funding.

Bringing the conversation back to wages, Congresswoman Gwen Moore asked the expert witnesses if there is any dignity in working a minimum-wage job (or two or three of them) when that leaves no time to do anything else except work.

Indivar Dutta-Gupta, president and executive director of the Center for Law and Social Policy, pointed out that the U.S. has now gone through the longest stretch in its history of not raising the minimum wage since it was established.

“All the while, housing costs have been rising exponentially. It’s a policy choice to have a lower minimum wage,” Dutta-Gupta said.

Most of the witnesses and legislators agreed that the best practices are those that “trampoline” people out of poverty in sustainable ways so they remain in the middle class.

“We scratch our heads and wonder why upward mobility isn’t possible for a good number of Americans,” Reynolds said. “Policy must demand that we test what we are doing for the poor, to understand the causal impact of every dollar. Use that evidence to double down on what works and stop doing what doesn’t work. And, where we find gaps, keep building evidence until we get the right solutions. People living in poverty deserve programs that work. Evidence honors their dignity.”

Originally published by Colleen Sharkey at news.nd.edu on August 02, 2022.