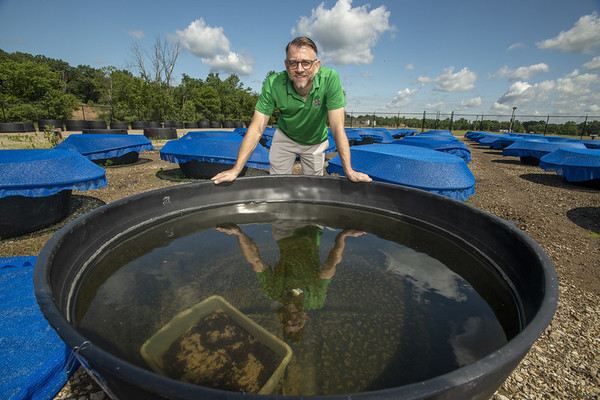 As temperatures warm from climate change, interventions that control the spread of the tropical disease schistosomiasis could become less effective, depending on the timing of the treatment, new research from the University of Notre Dame shows.

Schistosomiasis is a worm infection transmitted from snails to humans in mostly tropical and subtropical parts of the world, with 90 percent of infections occurring in sub-Saharan Africa. The disease is second only to malaria in its global impact.

Research from the lab of Jason Rohr, the Ludmilla F., Stephen J. and Robert T. Galla College Professor of Biological Sciences, and collaborators, published recently in Proceedings of the National Academy of Sciences (PNAS), demonstrated three significant findings. First, interventions that target the free-living parasite or snail stage of the life cycle alter seasonal disease dynamics. Additionally, they are more effective at cooler than warmer times of the year, and therefore will often be less effective with global warming.

“This is what makes these common interventions less effective at warm times of the year and why global climate change will likely increase schistosomiasis risk in regions that move closer to the thermal optimum for transmission,” Rohr said.

Also, “iInterventions, such as mass drug administration, that are targeted at the third part of the life cycle -- humans -- are not as affected by warming temperatures,” he said. This is because humans, unlike snails and the parasite, regulate their own temperatures, and therefore increased regional temperatures are less likely to affect the efficacy of interventions targeting humans.

To come to these conclusions, Rohr and colleagues conducted several experiments and gathered published data to fully develop a mathematical model that captures the temperature-dependent transmission of human schistosomiasis and the effects of interventions on this transmission.  This model was then coupled with estimated seasonal surface water temperatures to predict how changes to water temperature will affect transmission at various locations in Africa.

The findings will further the research in the Rohr lab aimed at developing a predictive model of climate effects on schistosomiasis. Rohr is affiliated with the Eck Institute of Global Health as well as the Environmental Change Initiative.

“We hope that these findings improve the efficacy of control measures for this widespread but neglected tropical disease and highlight the need to mitigate against climate change to protect human health,” Rohr said.

Originally published by Deanna Csomo McCool at science.nd.edu on March 09, 2021.