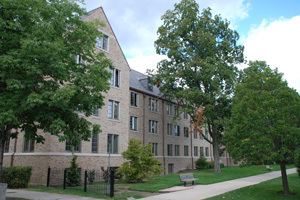 Cavanaugh Hall is the winner of the 2009 Dorm Energy Competition, having reduced electricity consumption by 34% compared to previous years. "We kicked off the competition by having a Wall-E watch in our 24 hour space-- at least everyone was in the same room and not using energy sitting in their separate rooms!" said Alicia Vasto, Cavanaugh's Sustainability Commissioner. "A couple of friends and I brainstormed ways to save energy and the biggest one, which must've put us over the top, was to set our lights to parietal settings every day, so we used half as much energy there." Cavanaugh's energy savings, which amounted to $718 for the month of November, will be donated to Student Government's Global Water Initiative, a year long campaign to raise money to build wells in Africa. "Since the money was going to a good cause, we had a greater incentive to save energy," said Vasto. Pasquerilla West ranked second in the competition, with a 27% savings over previous years. "We tried to make it fun by putting Christmas lights in the bathrooms and putting tape over the light switches," said Lauren Demeter, PW's Sustainability Commissioner. "The other major thing was making a concerted effort to remind people to unplug everything before they left for break." All together, the residence halls saved 58,800 killowatt hours, equivalent to $2,940 worth of electricity and 84,000 pounds of carbon dioxide emissions.