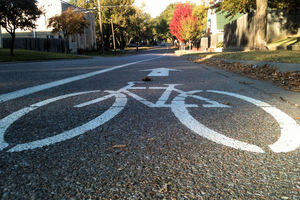 The county Board of Commissioners on Tuesday accepted bids to widen Juniper Road between Cleveland Road and the University of Notre Dame to accommodate one or more bike lanes.

The county, in partnership with Clay Township and the town of Indian Village, is considering three separate options to accommodate bike traffic in the area, accounting for the range of bids.

Because of the expense associated with modifying the existing bridge structure, the lane or lanes would not extend beneath the Indiana Toll Road, which crosses Juniper between Pendle and Kintz Drive. However, due to the planned relocation of Douglas Road, bikers will be able to access campus without going under the bridge.

According to Commissioner Andy Kostielney, now that the bids are in, the county, Clay Township, and Indian Village can take the information, present it to residents, and determine the best of the three options based on the amount of financing available.

Commenting on the need for bike lanes along Juniper, Kostielney noted that the portion of the narrow, two-lane road between campus and Cleveland Road is one of the more heavily biked stretches in the county, particularly during the school year. He said he expects work on the project to begin later this year or early next year.

A previous version of this article was published by Erin Blasko for the South Bend Tribune on August 28, 2012.