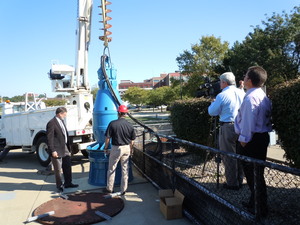 What began nearly three decades ago culminated in a momentous occasion for the City of South Bend this week. On August 22nd, a 62.9 kW capacity hydroelectric turbine was installed at Seitz Park on the East Race near the fish ladder. The installation comes some 29 years after it was purchased.

Once the turbine is fully operational it will power Howard Park’s human rights building, recreation center and ice ink as well as lights along the East Race.The majority of the power will be used at the ice rink.

During the warmer months of the year, the time when the ice rink is closed, the turbine will feed energy directly into the grid; using the grid as a sort of battery for excess power. Then, when winter rolls in, the “stored” power will be sent back to Howard Park to power the ice rink via energy credits. This is made possible by a net metering agreement between the City of South Bend and Indiana Michigan Power.

Jonathan Burke, Director of the Municipal Energy Office of South Bend, and Kathleen Petitjean, the woman who rediscovered the long-forgotten turbine, were both influential in making this project a reality.

According to Burke, “The name plate on the turbine said 45 kW, however, when we started to refurbish the turbine, which had been in storage for quite some time, we found it was actually a 62.9 kW unit.” The higher capacity unit, while costing more to install, will save the city an estimated $40,000 annually.

This isn’t the only hydro power project being pursued by the city. Plans for a 1.8 MW hydroelectric facility are already in the works. If financing can be secured, that facility would result in a one million dollar return on energy costs per year for the city.

A green ribbon cutting ceremony to canonize the newly installed turbine will be held at Seitz Park on September 26th. The ceremony coincides with the green energy portion of Energy Week running from September 24th to September 29th.