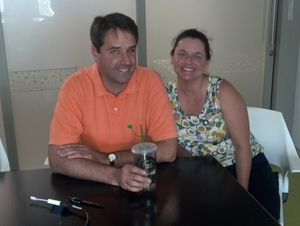 For those students living on the fourth floor of a dorm, or staff members working on the upper floors of an office building, the stairs might seem like a largely irrelevant fixture, built only for emergencies. The elevator becomes the standard way to reach the upper floors due to its ease and convenience. However, the members of the 5th floor of Grace Hall have a much different opinion.

Fifth floor Grace is home to the Office of Marketing Communications and Public Relations and three elevators. However, these elevators don’t often stop on the fifth floor anymore. In fact, these very competitive Domers just crowned a victor in their first ever reintroduction-to-the-stairs competition.

Jane Morrow, a news and web editor thought of the competition while waiting for the elevator with a colleague. “Why are you taking the elevator?” she asked, but neither of them could think of a reason. “People forget about the stairs,” she said, so Jane started a contest to reacquaint her floor mates with the stairs. For the next three days, she and her co-workers logged the number of times they took the stairs. When all was said and done, they had used the stairs 188 times. John Nagy, with 23 trips, was declared the Stair Master. His prize was a reusable cold cup, a fittingly green end to the energy-saving competition.

Why spend the extra time to take the stairs? The reasoning here is twofold. Firstly, every trip taken on the stairs lowers campus energy consumption. According, to slate.com a typical elevator in a three story office building uses approximately 3,800 kWh per year, the same amount the average American household uses in four months.

There are also health benefits to climbing the stairs. According to Livestrong.com, a 150 pound person climbing one flight of stairs burns about five calories. Thus, John burned about 575 calories over the course of the three day competition. For John, this was enough benefit. “I don’t have too many other opportunities to exercise,” he said.

The stair competition is easy to organize and has concrete environmental benefits. In fact, Jane said she is planning to organize another during the winter. Hopefully other offices around campus will follow her lead.