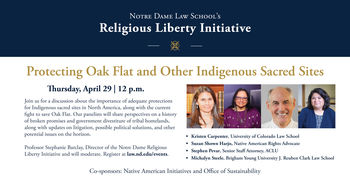 Join us for a discussion about the importance of adequate protections for Indigenous sacred places in North America, along with the current fight to save Oak Flat. Our panelists will share perspectives on a history of broken promises and government divestiture of tribal homelands, along with updates on litigation, possible political solutions, and other potential issues on the horizon.

Professor Carpenter teaches and writes in the areas of property, cultural property, American Indian law, and indigenous peoples in international law. She also serves on the United Nations Expert Mechanism on the Rights of Indigenous Peoples as its member from North America.

Professor Michalyn Steele (Georgetown University Law Center ’01) joined the faculty of BYU Law School as an Associate Professor in 2014, following two years as a Fellow and a semester as a Distinguished Practitioner in Residence at the Law School. She has taught Federal Indian Law, Evidence, and Civil Rights.

After beginning her legal career with Sonosky, Chambers, Sachse, Endreson & Perry, a highly regarded D.C. firm specializing in the representation of Indian tribes, Professor Steele worked for six years as a Trial Attorney in the U.S. Department of Justice's Civil Rights Division. Professor Steele worked in the Housing and Civil Enforcement Section, where her primary responsibilities included litigation and investigations to enforce the Fair Housing Act, Title II of the Civil Rights Act, and RLUIPA. While at the Department of Justice, her work was honored with the Division’s Special Act Award in 2006 and the Division’s Special Achievement Award in 2007, 2008 and 2009. Beginning in late 2009, Professor Steele worked for several years as a Counselor to the Assistant Secretary for Indian Affairs, Larry Echo Hawk, at the U.S. Department of Interior. She is a member of the Seneca Nation of Indians of New York.

Professor Steele holds a B.A. ('92) and an M.A. ('94) in Humanities from BYU, with an emphasis in English literature and Native American studies.

Suzan Shown Harjo (Cheyenne and Hodulgee Muscogee) is an advocate for Native American rights. She is a poet, writer, lecturer, curator, and policy advocate, who has helped Native peoples recover more than one million acres (4,000 km²) of tribal lands. After co-producing the first Indian news show in the nation for WBAI radio while living in New York City, and producing other shows and theater, in 1974 she moved to Washington, DC, to work on national policy issues. She served as Congressional liaison for Indian affairs in the President Jimmy Carter administration and later as president of the National Council of American Indians.

Stephen Pevar is a Senior Staff Attorney in the ACLU’s Racial Justice Program and has been on the National Legal Staff for 37 years.  Stephen specializes in Indian and tribal rights, prisoners’ rights, free speech of public employees, and the separation of church and state.  He has litigated some 200 federal cases involving constitutional rights, including cases in more than ten different Federal District Courts, three different U.S. Courts of Appeals, and one case in the U.S. Supreme Court.  Prior to joining the ACLU, Stephen served as a staff attorney with South Dakota Legal Services on the Rosebud Sioux Indian Reservation. In addition to his work with the ACLU, Stephen authored The Rights of Indians and Tribes (Oxford University Press 2012). He has served as an adjunct professor at the University of Denver School of Law and the University of Connecticut School of Law and joined New York University School of Law as an adjunct professor in the spring of 2015. He is a graduate of Princeton University and the University of Virginia School of Law.

This event is sponsored by the Law School, Native American Initiatives, and the Minor in Sustainability