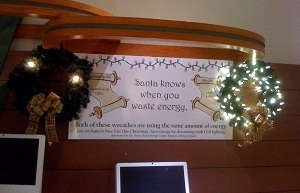 He sees you when you're sleeping, he knows when you're awake, and according to the "Notre Dame Energy Center":http://energycenter.nd.edu/, Santa knows when you waste energy. Above the computers in the DeBartolo hallways, the Energy Center has erected a display that educates students and faculty about the energy saving potential of LED lighting. Energy Center Student Advisory Board member Meehan Lenzen says, “When you go shopping for new Christmas lights, choose LED.” LED stands for light-emitting diode and when compared to traditional Christmas lights, LEDs use 90% less energy. LEDs are also attractive because they have a much longer lifespan and their plastic bulbs don’t break as easily as glass bulbs. Because they use less energy, they are not nearly as hot as traditional bulbs, making them safer for use on Christmas trees as well. The DeBartolo display shows that there is an obvious difference in the amount of lighting you get with LEDs for the same amount of energy. Dillion Hall has taken the message to heart and is designing an LED light display for the front of the dorm. Look for nightly shows on South Quad before finals begin. LEDs aren’t the only way to go green this year. Christmas is a joyous season of light and revelry, but it's possible to accumulate a lot of waste amongst all the merriment. According to National Geographic magazine, “Between Thanksgiving and New Year's, Americans throw away a million extra tons of garbage each week, including holiday wrapping and packaging.” Instead of buying wrapping paper, try giving your gifts a personalized touch and decorating brown paper bags. The Sunday newspaper comics also make colorful recycled wrapping. Lenzen believes that less is more this holiday season, “Making recycled Christmas decorations and gifts instead of buying them leaves more time to spend with friends and family.” Purchasing a freshly chopped tree to decorate isn’t as environmentally egregious as you might think. Christmas trees are harvested almost entirely from tree farms that plant new saplings for future seasons for every tree they cut this season. Still, the best decision may be to buy a live, potted tree and plant it in the spring. If you do choose to use a freshly cut tree, make sure it is taken to a Christmas tree recycling center to be turned into woodchips for landscaping rather than buried in a landfill. St. Joseph County collects Christmas trees for chipping starting Dec. 28. Check with your local trash and recycling collector for more information. Being eco-friendly does not mean being less festive. Celebrate the richness of the Christmas season, but when you deck the halls this year, please deck them greenly.