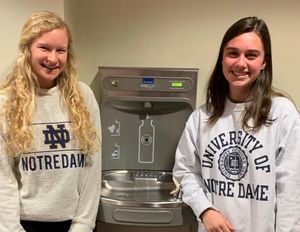 “Professors and students not directly involved in sustainability on campus thought it would be easy to get a water filter in Debartolo,” says Catherine Connell ’22. “But we thought it would be an undertaking in itself.”  Catherine, and Alana Lanser, along with fellow freshmen Tim O’Sullivan, Sirak Negash and Quinn Mahoney focused their “philosophy in action” project on getting a water filter and water bottle fill station in DeBartolo Hall, quickly proving their theory that this seemingly small task would be a project worthy of a whole semester.

When philosophy professor Dr. Margaret Schmitt tasked her fall Introduction to Philosophy class with finding a topic for a semester-long project, the five freshmen realized that sustainability was something that brought them together. During Catherine’s last two years of high school, there was a student-lead push for more presentations on issues such as recycling and composting, prompting her to think more about sustainability. Alana, meanwhile, thinks about hurricanes when she thinks of sustainability. Growing up outside of Atlanta, she never had to evacuate because of a hurricane until she was 18, but her family has had to evacuate twice since then. She knows these local impacts are connected to the larger landscape of sustainability and she wants to help prompt positive change.

The challenge of uniting different views on sustainability into one widely relatable project was two-fold: communication and contacts. Dr. Rachel Novick, the director of the Minor in Sustainability, recommended the DeBartolo Hall water bottle filler project as an opportunity to implement tangible change on campus. Keeping their class project in mind, the group focused on communicating the philosophy behind the need for a water bottle filler in one of campus’ busiest academic buildings.

Alana and Catherine emphasized the notoriously bad taste of DeBartolo water, explaining that the water filter eliminates this taste, while the existing drinking fountains do not. “If there was a water filling station in Debart then people wouldn’t have to buy as many plastic water bottles from vending machines,” Catherine says. Their messaging borrowed largely from Pope Francis’ Laudato Si’ emphasizing the importance of caring for God’s creation.

While the message was well-received, the largest challenge was finding the right person to push the change through.  They presented to the faculty senate, who supported the idea but said it was outside of their jurisdiction. They emailed different contacts, often receiving a polite response simply directing them to a new contact. They kept going even when the semester’s halfway point came and went with little forward motion.

Then they met Caitlin Hodges ’17, Associate Program Manager in the Office of Sustainability. Caitlin communicated openly about the Office’s five-year plan, listened to their pitch for the water bottle filler and promised to pitch the proposal to her leadership. Finally, after many presentations and conversations, the group’s message had reached the person who could make a decision.

The group had to give their final presentation to their philosophy class, explaining that they found a promising entry point but had not yet heard of a decision. Shortly afterward, they received an email from Caitlin. A water bottle fill station would be installed in DeBartolo over winter break, with more planned for the future. “It shows that students have a voice,” Alana emphasizes. While faculty had been encouraging this change for years, it was five freshmen that pushed it through.

They achieved this by “keeping with it even if you don’t see the end result being what you want,” Catherine says. This experience has boosted Alana and Catherine’s enthusiasm for sustainability and taught them how powerful it can be to persevere. “I definitely see people use it every time I walk by,” Alana says. “You can see the number on the screen and it’s an impressive amount,” adds Catherine. They agree that this is a great reward.

Originally published by Natalie Ambrosio ’17 at sustainabilitystudies.nd.edu on March 04, 2019.