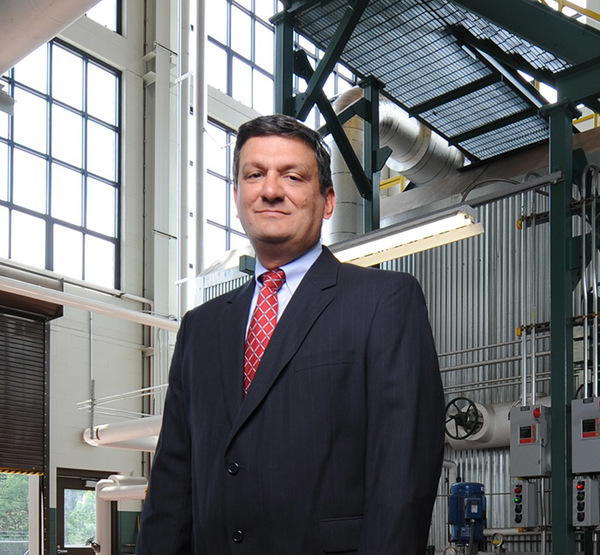 For Paul Kempf, studying and then working in electrical engineering came second nature.

His father, Kenneth “Kenny” Kempf started at Notre Dame as an arts and letters major. Kenny took a few electrical engineering courses as electives and realized that engineering was more up his alley.

However, it would be a bit before he could make the switch. A world war was ensuing. The university was serving its nation’s mission, pushing degrees out in order for students to be eligible for the draft. Kenny earned his Bachelor of Arts degree and quickly shipped off to serve in the Army Air Corp during WWII.

Upon his return home, he came back to Notre Dame and switched up to study electrical engineering. He later married and settled into Notre Dame housing that adjoined Vetville (married student housing for WWII vets and their families). Kenny and Julia would soon add Paul to their family and he would call the University of Notre Dame his first home. After earning a Bachelors and Masters of Electrical Engineering, Kenny went on to teach for the department and eventually directed operations of the Notre Dame power plant.

Elements of NDEE were naturally a constant in Paul’s upbringing. In the mid 1960s, his parents housed a newly hired NDEE professor, James L. Massey, as he looked for housing upon acceptance of a teaching position with the department. Paul would later have him as his Probability and Statistics instructor.

“I did alright in his class,” Paul recalled.

James would go on to become internationally known for his exceptional work in the field. Even after retirement and his recent passing, he is still widely known and highly respected on campus and especially within the NDEE department.

Even as a college freshman, Paul would hitch a ride to campus with his dad. At that time, Kenny was directing operations at the power plant. Paul would wait at the plant an hour or so each morning before heading off to classes. Plant employees would often comment, “you’re going to come back here and run this place.” That was the furthest thing from Paul’s mind. He wanted to run alright, but run around the world, not stay put in his hometown of South Bend.

Then, Paul’s junior year, just as his grades were taking a dramatic turn upward– from struggling to pass to dean’s list–Kenny passed away. Being an only child, he felt a responsibility to be close to his mother.

Upon graduation in 1980, he went on to work for Koontz-Wagner. For nine years he worked as an engineer in their Custom Controls division. “We didn’t build a standard product,” explained Paul. “We looked at what our customers needed, and custom built a system for that application.” That work was done all over the United States and some even internationally.

He caught, an albeit small, glimpse of the world after all, but Notre Dame would eventually call him back home.

One fall day, Paul was helping the director of utilities for campus– a man that was once a student of his father’s and later, Kenny’s assistant in the Notre Dame power plant. They were providing electrical maintenance support for a Notre Dame football game. He asked Paul, “Would you ever want to come work at the power plant?”

Turns out, he would.

He started as the sole electrical engineer working in the utilities department on campus in 1989. He was appointed interim director of utilities in 1999, which became an official title in 2000. Paul is humble when recalling his many title changes and promotions. “Somewhere along the line, maybe 2013, I also picked up the responsibility of maintenance,” he recalled. He is now Senior Director of Utilities and Maintenance.

Being good stewards of the university’s resourcesall while providing compliant, cost effective, and efficient energy for campus is the goal. A challenge Paul and his team continue to tackle, just as his predecessors did. “There is always waste,” explained Paul. “We’re going to continue to squeeze more energy out of what we already use; recover energy from existing processes and re-use it, rather than make it all over again.”

One of the strong foundational energy leads his predecessors put into place was to co-generate electricity beginning in 1953. This strategy has saved the university millions of dollars each year and has reduced its environmental footprint through increased efficiency.

In 2008, energy conservation became the name of the game, over the next decade conservation strategies reduced campus energy usage by nearly 20%, saving the university over $20M.

“We think long term and aspirationally, using a forecast model that considers campus growth and energy production strategies to project needs for the next 50 years,” said Paul.

Despite considerable campus growth within the last decade, utility consumption has remained relatively constant due to the conservation gains. This means the actual energy consumption per gross square foot has reduced. Under Paul’s direction, emissions were also reduced, and sustainable energy measures were taken.

In 2015, a major request came down from university administration. Get the campus completely off coal.

Paul and his team had already been working to move towards an increased use of natural gas with a commensurate reduction in coal consumption. However, to completely walk away from coal was a big deal. He thought back to the oil embargo of the 1970s, the recent natural gas price spikes, and thought forward to the possibility of being cut off from both.

“When you see coal inventory on the ground, you can see and control your energy destiny,” explained Paul. “We wanted to reduce our carbon footprint. Fuel, oil, and coal have similar carbon impacts. While natural gas is approximately 55% as carbon intensive as the other fossil fuels, coal does the job at a quarter of the cost.”

Now the future of Notre Dame Utilities is in growing its use of renewable and recoverable energy. This shift has ushered in the era of geothermal, hydroelectric power, regeneration, and solar.

When it comes to new technology, the strategy has been to try it out on a small scale, learn about it and if it goes well, scale up.

“We try not to make huge technology bets,” explained Paul. “We want to make sure we hold out for the right technology and we understand how to gain its full measure of effectiveness.”

As he looked back on his time as an NDEE student, Paul nostalgically laughed and recalled that undergraduates at that time had a curriculum choice of a “computer option” or “non-computer option.”

After discussions with his advisor, Professor Emeritus Eugene Henry, Paul knew power was the electrical engineering focus he needed to hone in on. That wouldn’t come easy though. At that time, the department offered very little support for pursuing the power field.

Professor Henry advised him, “You’re going to have to get into some independent study and figure this out for yourself.”

He would end up in an independent study directed by one of the most memorable and celebrated NDEE professors to date, Art Quiqley. He taught in the department for over half a century.

“My dad warned me he was the quintessential absent-minded professor, but only because he knew so much and had so much he wanted to share with you, his passion deterred his focus,” remembered Paul.

Professor Quigley would eventually ask Paul to be a teaching assistant for his Electromechanical Devices course his senior year, a position that was customarily held by graduate students.

This was after he worked night shifts for a year at the university infirmary as well as assisted electronic technician, Royce Eck (at that time, students admitted to the university that were children of faculty or staff, were required to also work on campus at least 12 hours a week). While being Eck’s right-hand man, he had the exclusive opportunity of bumping elbows with faculty in the break room. “When I was stuck on a problem, I would find myself saying, ‘hey professor, while you’re here…’,” recalled Paul.

“These unique student-work opportunities became internships of sorts for me,” explained Paul.

Today, NDEE students have curriculum options when pursuing and studying the power sector of EE, as well as internship opportunities working for big names in the power industry. Students also get to tour the University of Notre Dame power plant, thanks to Paul’s open-door leadership.

His advice to current and future EEs: don’t limit yourself. Find a way to try out what interests you. Paul emphasized: “You have an impact on getting yourself where you want to be.”

Originally published by Leslie Lestinsky at NDEE on June 7, 2019.