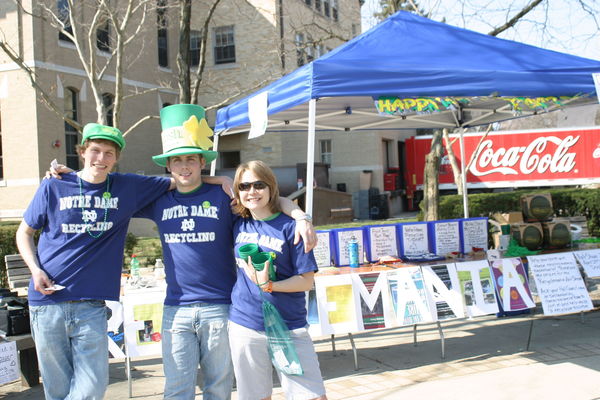 The results are in, and the University of Notre Dame finished near the top of the class among the 510 schools participating in the 2009 RecycleMania competition. Notre Dame competed in three categories: the Grand Champion, the Per Capita Classic, and the Gorilla Prize. We finished in the top third of schools listed in the Grand Champion category, the winner being the school that demonstrates the greatest achievement in both source reduction and recycling. In the Per Capita Classic, schools compete to collect the largest amount of recyclables per person and Notre Dame finished in the top 5% of these schools.

The Gorilla Prize is given to the school that can collect the highest gross tonnage of recyclables regardless of campus population – Notre Dame was #14 out of the 293 schools participating in this category. 2009 was the first year Notre Dame participated in the full campus competition categories.

RecycleMania, now in its 9th year, is a national competition and benchmarking tool for college and university recycling programs to promote waste reduction activities to their campus communities. The 4.7 million students and 1.1 million faculty and staff on these campuses collectively recycled or composted just over 69.4 million pounds of waste over ten weeks.