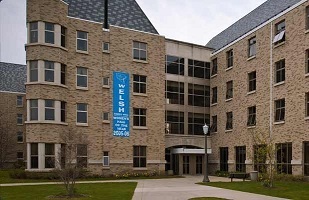 Game day hasn’t even arrived and Notre Dame has already claimed victory over Wake Forest. No, not in football, but in the Energy Bowl: an energy reduction competition between the two schools. This two week competition started on November 1st and ended two weeks later on the 14th. Notre Dame finished the competition with a 9.6% reduction and Wake Forest reduced their consumption by 8.1%.

In addition to the Energy Bowl being a competition between the two universities, it also pit the Notre Dame dorms against each other. In this intra-campus competition, Welsh Family Hall emerged victorious with an impressive 24.3% reduction. Ryan and Knott halls came in second and third place with 21.2% and 17.7% reductions, respectively.

“The dual nature of this competition made it especially fun,” said Stephen Elser ‘13. “Not only was my dorm pride at stake, bragging rights over Wake Forest were also on the line.” With the stakes so high, the Leprechaun took it upon himself to promote the competition together with The GreenMan in this video.

Welsh Family will be awarded a Play Like A Champion Today banner signed by all the football coaches, and Ryan and Knott will receive footballs signed by Brian Kelly. The top performing dorms will also be recognized at today’s pep rally and at tomorrow’s game. “We’re grateful to Athletics for all their support in recognizing students’ efforts to save energy and incentivizing them to keep raising the bar in dorm energy competitions,” said Rachel Novick in the Office of Sustainability.

Energy conservation strategies ranged from lights-out campaigns to laundry bans to simply unplugging electronics. “Knott hall knew that most of our electricity consumption was from the lights, so we made a full-dorm effort to reduce lighting use,” said Jack McLaren, Sustainability Commissioner of Knott Hall. “Turning the hall lights off and encouraging people to work and play in the dark was crucial to our third place finish.”