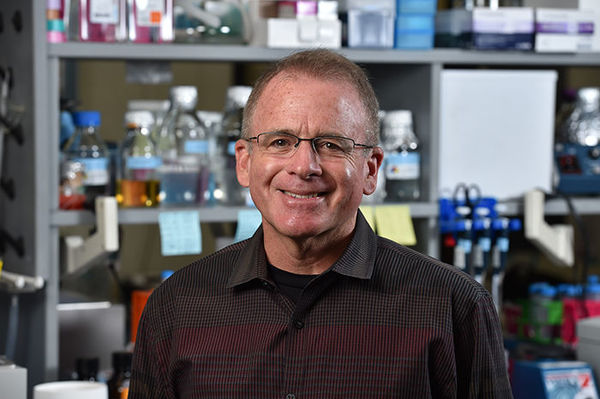 Ask Gary A. Lamberti, professor in the Department of Biological Sciences, to name his favorite creature, and it takes him only a few seconds to think before saying, “a caddisfly larva” or, as it is known in science circles, Helicopsyche borealis. He not only mounted a drawing of this common but extraordinary bug on his office wall in the Galvin Life Science Center, but also had it embroidered on baseball caps worn by his students.

His enthusiasm hasn’t gone unnoticed by his peers. Lamberti recently was elected as a fellow of the Society for Freshwater Science, the leading international freshwater organization. The distinction recognizes sustained excellence in contributions to freshwater science, research, policy, or management. Lamberti, a member of the society for 35 years and president in 1998, said it is very rewarding and a particular honor to be recognized for his work.

He studied insects in streams and became interested in freshwater ecosystems as a graduate student at the University of California, Berkeley, and hasn’t looked back since. His life’s work is devoted to discovering how freshwater ecosystems operate and what humans can do to protect and restore these critical ecosystems.  Working mainly in the Great Lakes (primarily Lake Michigan) and Alaska, Lamberti said it is possible that we will run out of clean fresh water before we run out of fossil fuels, calling fresh water the “new oil of the 21st Century.”

The biography from the Society for Freshwater Science states that Lamberti has “an enduring love for aquatic invertebrates, which permeates all of his research”—a comment that ties the honor neatly with his affinity for the caddisfly larva.

“It happens to be an indicator of good water quality; it is an important member of the food web, eats a lot of algae, and is eaten by fish, particularly when entering the adult winged stage,” said Lamberti. “But while it is a larva, it protects itself by making a rock case that it carries around like a suit of armor.” Artists like Hubert Duprat of France have seized upon that trait, transporting the larvae to labs so the insects can build their cases out of materials like gold, pearls, and jewels.

A faculty member at Notre Dame for 29 years, Lamberti has mentored more than 30 master’s and doctoral students and has more than 175 publications to his credit. His book, Methods in Stream Ecology, is now in its third edition. He is also a fellow in the American Association for the Advancement of Science. Lamberti is director of Notre Dame’s Stream and Wetland Ecology Laboratory (SWEL) as well as the GLOBES Program through the John J. Reilly Center.

Originally published by Kathy Jonas at science.nd.edu on September 18, 2018.