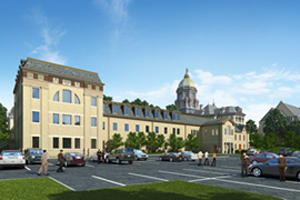 Carole Sandner Hall was recently certified LEED Gold by the United States Green Building Council. The building, opened in the summer of 2011 as the new home for the Alliance for Catholic Education, is the sixth on campus to receive LEED certification. Carole Sandner Hall features the following sustainable design and construction practices:

Carole Sandner Hall connects to the historic Institute for Educational Initiatives building. The hall is at the heart of campus adjacent to the Basilica of the Sacred Heart, the Grotto and the Main Building.

A previous version of this article was originally published by Brittany Collins at newsinfo.nd.edu on April 19, 2012.