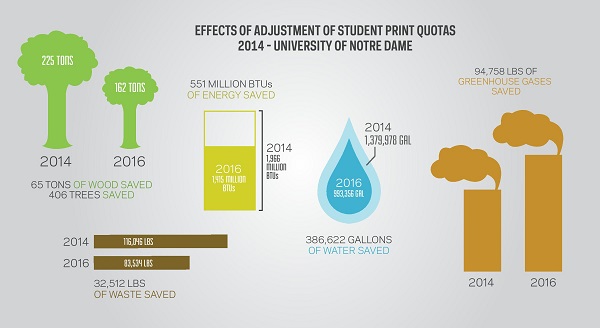 Since the adjustment of student printing quotas in 2014, the amount of paper used by students through the PrintND program has decreased by 28% - almost 3.1 million sheets of paper.

This reduction, largely unnoticed by users, has had a significant impact on Notre Dame’s environmental footprint. In five measured areas: wood use, net energy, greenhouse gases, water consumption, and solid waste, the University has decreased its impact on the environment.

In 2014 it took 225 tons of wood to produce the amount of paper used in the PrintND student printing program, the equivalent of about 1,449 trees. In only three years, teamwork between students and the Office of Information Technologies has reduced this number to 162 tons of wood, or about 1,043 trees- saving an impressive 406 trees/year. 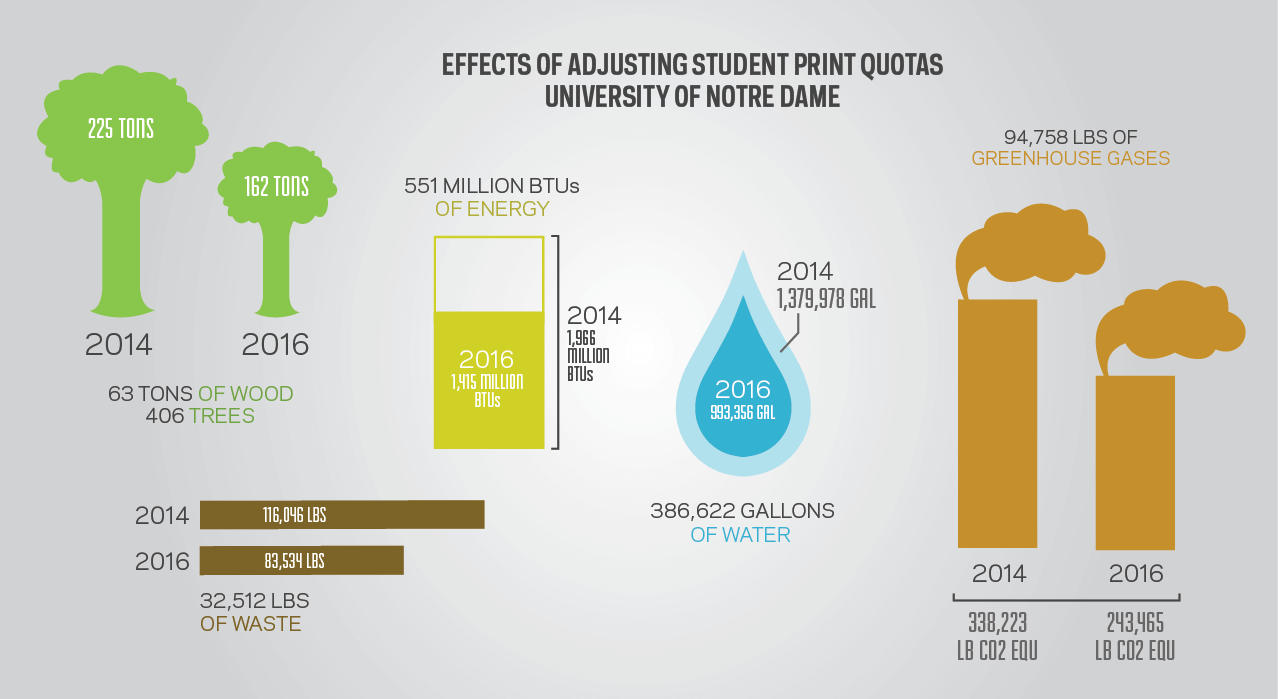 The use of paper doesn’t only create physical waste. Greenhouse gases are produced when fossil fuels are burned in the production of paper as well as during its decomposition in landfills. The University of Notre Dame has saved 94,758 lbs of CO2 equivalent from being released into the air- the same as taking nine cars off of the road each year.

This reduction in paper use has also decreased solid waste. Sludge and other wastes are generated during pulp and paper manufacturing and additional solid waste is created when used paper is disposed of in landfills and burned in incinerators. The reduction in printing on Notre Dame’s campus has reduced contribution to this waste stream by over 16 tons per year.

Decreases in the amount of water used to make the paper and the Net Energy used to produce and consume the paper were also seen.

“We are very excited about the success of the PrintND program” said Bob Guthrie, Project Coordinator, and Chad German, Academic Computing, both in Teaching and Learning Technologies. “In three years we’ve had this incredible reduction in environmental impact without sacrificing service or inconveniencing students- since the change less than one percent of all of our students have had to buy more quota.”

In fact, the OIT has actually improved printing services over the past three years. Through the transition to Canon, the OIT has added several new multi-functional printers across campus for student use, introduced high-capacity printers in high volume areas like DeBartolo Hall and Hesburgh Library, as well as introduced a new swipe system for better ease-of-use.

“We’re proud of what the students have accomplished in such little time and are excited to see this trend continue.” Said Peggy Rowland, Senior Director of Teaching and Learning Technologies. “It truly is a partnership started with Student Government and the Graduate Student Union and continued by all students. All we can ask is for students to keep asking themselves ‘Do I really need to print this?’ before they click the button.”