Notre Dame is actively addressing the challenge of reducing carbon dioxide emissions stemming from power generation, with the goal of becoming a carbon neutral campus by 2050.  These initiatives fall into three categories:

The strategies employed in the ECM program include

In ECM II, implemented in 2011-2013 in 55 buildings, ECM I strategies were continued, but efforts expanded into new areas. These included installing LED lighting in exit signs, reducing the flow rates of fume hoods, and replacing motors and pumps with high-efficiency models. ECM II  yielded an annual savings of over $1 million and reduced campus carbon dioxide emissions by 14,900 tons each year.

ECM III, begun in 2014, was concluded in early 2016.  Once again, the basic strategies of ECM I and II were utilized, with additional efforts in new areas such as variable speed air compressors, high-bay LED lighting, energy metering, laboratory ventilation reductions, and computerized building performance analysis using "big data" techniques.  ECM III resulted in an estimated reduction in campus carbon dioxide emissions of 12,000 tons per year. Investment in the first three ECM phases totaled nearly $13 million, roughly equal to the amount of savings generated through FY15, providing an overall return on investment of 15% annually. 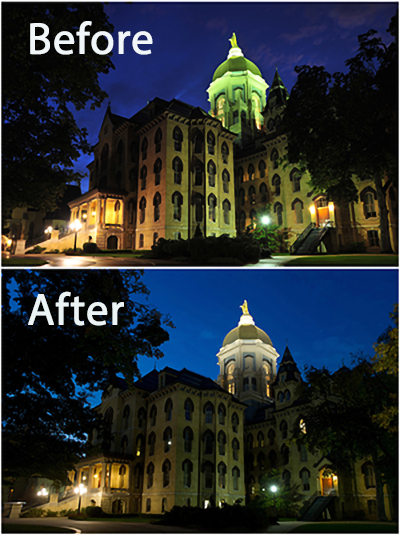 The Golden Dome is illuminated by state-of-the-art LED lights.  These LED lights reduce energy consumption by over 35,000 kilowatt hours per year and reduce the campus carbon footprint by approximately 12.2 tons per year.

Since September 2009, the University has retrofitted over 1200 outdoor light standards with LED lamps, resulting in reduced carbon dioxide emissions of about 450 tons per year.  As part of ECM IV, the University retrofitted another 300 outdoor light standards, completing the conversion of all existing campus exterior lighting to LED.  LEDs are now the campus standard for new lamp posts going forward.   Notre Dame joined the LED University program in 2008, an international community of universities working to accelerate the adoption of energy-efficient LED lighting.

For buildings that have digitally controlled heating and cooling, sensors maintain each room's temperature between 70° and 75° during the time of occupancy but allow it to fluctuate within that range.  Allowing the temperature to fluctuate rather than trying to maintain an exact temperature reduces energy use by minimizing the use of mechanical systems.  Those faculty, staff, and students who are not in digitally controlled buildings are asked to keep residential, office and classroom temperatures below 75° during the heating season and within the 70° to 75° range during the cooling season.

Over the last several years, the Notre Dame Power Plant has burned a greater percentage of natural gas versus coal, with the result that the carbon intensity of our energy has been declining. In the fall of 2015, President Jenkins announced that the university will cease burning coal entirely within five years and invest $113 million in renewable energy sources and projects. In September 2019, the University ceased burning coal one year ahead of the scheduled 2020 goal.

Several renewable energy projects have been installed on campus: