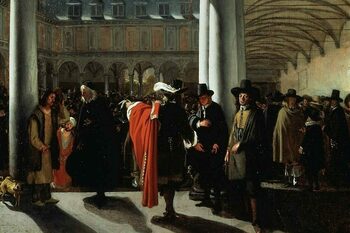 The Industrial Revolution that began in Britain in the late eighteenth century is rightly regarded as a critical turning point in the economic and environmental history of the planet, but it did not come out of nowhere. The key ideological, institutional, economic, and political strands that led to and through modern industrialization were forged and reinforced in seventeenth- and eighteenth-century Western Europe. This lecture will consider some of these strands and suggest that their abiding influence and globalized spread are critical to explaining the environmental predicament in which we find ourselves today.

This event is free and open to all.

Complimentary lunch will be available 30 minutes PRIOR to the lecture while supplies last.

Photo: Courtyard of the Exchange in Amsterdam by Emanuel de Witte, 1653. Courtesy of Wikimedia Commons.

Professor Brad Gregory serves as the Henkels Family College Professor of History. His research interests center on Christianity in the Reformation era (sixteenth and seventeenth centuries), including magisterial Protestantism, radical Protestantism, and Roman Catholicism approached comparatively and cross-confessionally. He hopes to understand the long-term ideological influences and institutional consequences of the Reformation era on the making of the modern Western world.