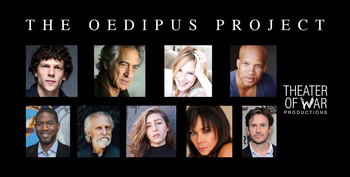 Following the reading of scenes, four members of the Notre Dame community will kick off the discussion with their responses to the reading. We will then open the discussion to the audience, facilitated by Bryan Doerries, director of The Oedipus Project.

Sophocles’ ancient play, first performed in 429 BC, just after a plague that killed nearly one-third of the Athenian population, is a story of arrogant leadership, ignored prophecy, intergenerational curses, willful blindness, and a pestilence and ecological collapse that ravages the archaic city of Thebes. Seen through this lens, Oedipus the King appears to have been a powerful tool for helping Athenians communalize trauma and loss, while interrogating their own complicit role in the suffering, not just of those around them but of generations to come.

To participate, fill out the form here.

Students are invited to gather for a watch party in Dahnke Ballroom, Duncan Student on October 27 at 6:30 p.m. This watch party is only open to Notre Dame students due to COVID protocols.